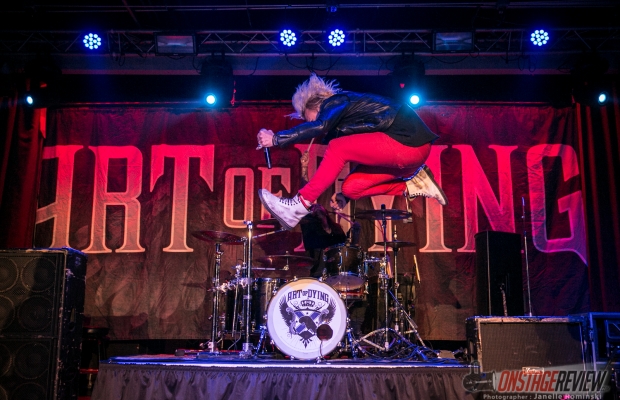 Vancouver-based quartet, Art of Dying, played an intimate concert at H.O.M.E. Bar Chicago in Arlington Heights, Illinois with Children 18:3 and Letters From The Fire.  Art of Dying is in the middle of a US tour sharing with fans their brand new tunes from their EP “Nevermore” that was released last month.   Many of my favorite tunes that were played included “Die Trying”, “All Or Nothing”, “Rise Up” and “Torn Down”.  The front man for Art of Dying, has such exuberance on stage, I nickname the band “Art of Flying”, as Jonny Hetherington jumps and flies, his band impresses my ears as he impresses my eyes.

Taking the stage before Art of Dying, was Minnesota Christian band, Children 18:3, a trio of talented musicians who show no signs of slowing down.  Their energy and enthusiasm for their music really drew you in to their love of the art of rock and roll.  I honestly had never heard of the band and that’s one reason I love opening bands, so newcomers can get introduced to new acts breaking onto the scene.  Throughout their show their ferocious female bassist, Lee Marie, never skipped a beat and was an acrobat from the beginning to the end.  She swung her bass around, jumped up and down, and has a killer backward bend.  The drummer, Seth, is an animal with guns bigger than some of his drums.  He played a mean drum solo and power encapsulates his every  move.  Vocalist, David, had a great stage presence.  It caught me off guard when towards the end, he broke out into a sermon about God. However, their band name led me to believe there might be some religious undertones with the “18:3” as scripture reads.

The San Francisco quintet, Letters From The Fire, opened up the show.  I previously saw LFTF at H.O.M.E. Bar two years ago, but with a different vocalist.  With the departure of their former male singer, the band brought in a female powerhouse named Alexa Kabazie, with vocal chords that rock.  The band has a great future ahead with an even more polished sound and show seeing them now, versus two years ago.  Their tunes are solid and they really draw you in with their passion for their art.

Check out our photos from the show below.

LETTERS FROM THE FIRE

Janelle Rominski’s favorite place to be is in the photo pit. She has been to over 600 concerts and loves the feeling of being close to so many talented musicians and taking quality photos of their shows. She began her passion of “rocktography” and show reviews as soon as she could drive herself to concert venues.
Related Itemsarlington heightsart of dyingchildren 18:3Featuredhome barjanelle rominskiletters from the fireMusic
← Previous Story OPETH @ RIVIERA THEATER – CHICAGO, IL
Next Story → BEARTOOTH @ House Of Blues – Chicago, IL