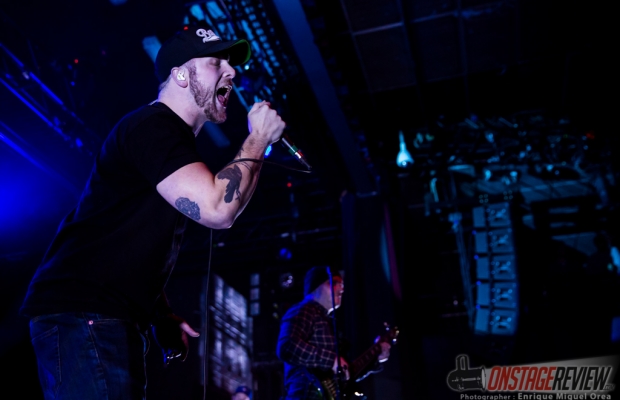 August Burns Red kicked off 2017 with a celebratory tour surrounding the success of their breakthrough album “Messenger,” which was released on June 19, 2007 as they hit the states for two months for the “Messenger 10 year Anniversary tour,” performing the album in its entirety.  In support, August Burns Red tapped in on a promising up and coming band ’68, In Hearts Wake, and co-headliner, Protest the Hero .

Making the third stop at New York City’s PlayStation Theater on January 6th, located in the heart of Times Square, ’68 was the opening band. Joshua Scogin put up a great performance on vocals and guitar along with drummer Michael McClellan. Joshua is known throughout the metal community as he is a founding member of Norma Jean and The Chariot. Forming in late November 2013, Joshua ventured into a new chapter in his music career and created ’68. The set list was focused mainly around their latest album release,” In humor and sadness.” I end up arriving too late to shoot in the photo pit but made my way towards the front of the stage and saw that not that many people were familiar with the band. But as ’68 progressed through the set list, more and more of the audience were getting into the groove. Joshua displayed an incredible stage presence that broadcasts his passion for music and the intensity he radiates is extraordinary. Both Joshua and Michael’s chemistry is fully displayed on their live shows as they feed off each other’s energy with Joshua somehow getting up on the drum set to both call out their next move as they were having a battle of the stage to keep that energy alive. By the end of the night, everyone at the PlayStation theater knew who ’68 was.

Up next were In Hearts Wake, making their way from Australia. Formed in 2006, they have released four albums. What makes this band stand out for me is the lyrical content combined with aggressiveness of the metal core genre, tackling on environmental issues. Both Jake Taylor (vocalist) and Kyle Erich (bassist) share vocal duties as Jake delivers a more aggressive (growling) tone to highlight and reflect the feeling and the topic of the song while Kyle eases down with a calmer singing to represent a sense of hope and innocence. The song “Divine,” is a perfect example which was the 5th song on the set list followed by “Breakaway.” At this point, the crowd was already rocking out and “Breakaway,” a song that required audience participate in singing along with the chorus, got me singing along as well. The energy that is In Hearts Wake was felt throughout the theater from the front row all the way to the seating area in the back.

As Protest the Hero were up next, it was difficult getting into the photo pit with the venue quickly filling up. The anticipation of the fans was met with the opening song “Yellow Teeth,” as a wave of crowd surfers were making their way to the front of the stage. After performing “Sex Tapes” and “Tidal,” vocalist Rody Walker took the time to thank the crowd for coming out to support the rest of the bill. The band was formed in Ontario, Canada and have been active since 1999; releasing a total of 5 albums with “Pacific Myth” being the latest release. Their previous album “Volition,” was crowd funded in 2013 with the initial fundraising goal of $125,000 surpassed in less than 2 days. Protest the Hero left a mark that night as the support of their fans has grown through the years. As they headed out, the crowd wanted more chanting “Encore.”

No energy was wasted when August Burns Red hit the stage as Jake and company started the night with “Truth of a Liar.” The explosiveness of Jake’s performance kept the crowd on its feet. Since they are consistently on tour, I usually purchase a ticket when they perform in New York but end up missing the show. As anxious as I was to finally attend, I was overwhelmed with how intense the fans were throughout the set. As the night progressed, the intensity of both the band and the crowd grew immensely high as both entities seemed to not take a break at all. The endurance was immeasurable as only a hand full of bands broadcast that feeling of adrenaline rush. If it wasn’t for the venues no moshing rule, one can only imagine how much more the audience would have fueled the band. It got to the point where I had to remove my sweater and gear because of how hot it was and security was kind enough to spray the crowd with water to keep us cool throughout the set. August Burns Red put up an incredible performance that night with people even talking about it after the show. If the tour comes to your city, make sure you attend for the love of metal!

My passion for concert photography began when I attended my first show at the age of 17, watching the 69 Eyes and Cradle of Filth perform at the “Irving Plaza” in New York City. But it wasn’t until 2014 that I was fortunate enough to purchase my first DSLR camera and given the opportunity to photograph local bands. Whether it’s a house show, bar show or a well-known venue, if I can bring in my camera, I’ll be there!
Related Items'68 BandABRAugust Burns Redconcert coverageConcert photographyEnrique OreaFeaturedIn Hearts WakeLive MusicMessenger 10 year Anniversary TourNew York CityNYCPlayStation TheaterProtest The Hero
← Previous Story TRANS-SIBERIAN ORCHESTRA @ Allstate Arena – Rosemont, IL
Next Story → Buckcherry @ NAMM JAM – Anaheim, CA