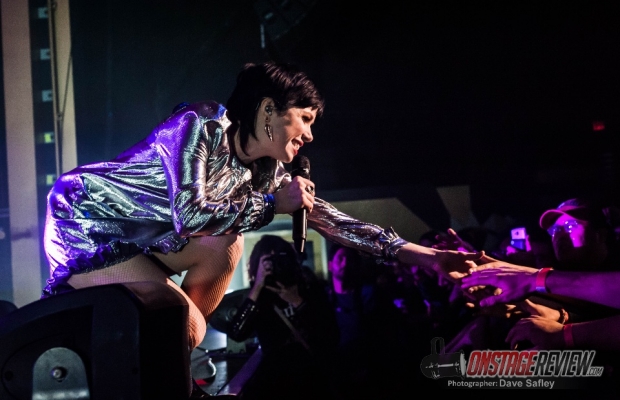 On Friday night February, 27th 2016 it was a brisk 68 degrees in Anaheim CA at The National Grove Theater.

Excited fans awaited the doors opening with a line that reached the entire length of the building.

National Grove of Anaheim was the next stop for Carly Rae Jepsen’s tour “Gimmie Love” which will continue tour dates all the way to the end of May 2016.

Playing to a near capacity crowd  filled with CRJ hardcore fans – with crowds cheering with passion and singing along to just about every song.

Carly’s fan base is from the very young to old as well as families, with wholesome lyrics to power house pop songs receiving major radio play.

As you will see in our collection of photos, she is devoted as ever to her fan base, showing emotion to leaning over the barricade to shake hands with her die hard fans whom made it to the front row.

Backing her was some very talented touring musicians. Carly whom became well known for her song Call Me Maybe  went platinum in more than a dozen countries in 2012. Scooter Braun (whom also manages Justin Bieber) stated that she needs to top that track for her next record.

You may also know Carly from her role on the Live Television Special “Grease Live” as Frenchy.

The Gimmie Love Tour started in support of her current album “Emotion” which really shows her talent with multiple chart topping tracks that have received worldwide attention.

The crowd continued to show enthusiastic support for the entire 21 song set which included the following performances:

* Run Away With Me

* Making the Most of the Night

* Tonight I’m Getting Over You

* When I Needed You

On Stage Review Photographer Dave Safley was able to capture the following moments during the show:

Photography is a passion of mine and I am blessed to be surrounded by amazing industry photography professionals. I have had the passion for photography since I was a teen back in the film days. From shooting film, developing and printing in my own darkroom, fast forward to today; I am now 100% digital. I possess a true passion for entertainment, celebrity, event and live performance concert photography, as well as fine art, photo journalistic, and street styled captures. Capturing the moment is my passion. Just me and the viewer creating and capturing moments in time.
Related Itemscarly rae jepsendave safleyemotionFeaturedgimme lovemodernpicsnational grove of anaheim
← Previous Story ANDREW WATT @ RadioContraband Rock Radio Convention – Las Vegas, NV
Next Story → AUTOGRAF @ Concord Music Hall -Chicago IL