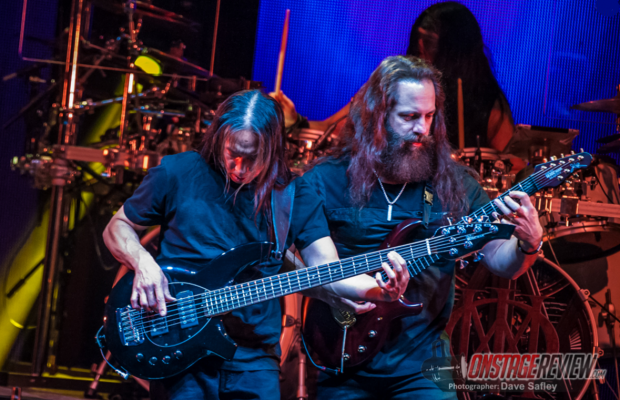 Dream Theater formed in 1985, a progressive metal rock band with their roots in Boston, made a stop on their current tour for The Astonishing at the City National Grove of Anaheim with a double-set show.

The visuals were amazing, taking the viewer on a journey of each track backed by their progressive musical styles. Graduates of the Berklee College of Music, John Petrucci, John Myung, and since 2011 Mike Mangini on drums whom replaced the original drummer Mike Portnoy, and frontman since 1991, singer James LaBrie took the audience of new and old die-hard fans on a musical ride throughout the night.

A surprise on this leg of the tour, and what a wonderful one at that, was during their new track “Our New World,” Lzzy Hale of Halestorm made a guest appearance, contributing her amazing vocal talent for a standing crowd of fans rocking with the song from start to finish.

The entire album of The Astonishing was played on this tour, causing poor reviews from some of the long time fans that were not too happy about not hearing some of the classic older tracks from the band. James LaBrie responded they realize that this choice will not please everyone but since new album The Astonishing is a conceptual album it is best fit to be played from beginning to end. The Astonishing was released on January 29th, by Roadrunner Records.

“The Gift of Music”

“A Savior in the Square”

“When Your Time Has Come”

“Brother, Can you Hear Me?”

A Life Left Behind”

“The Patch that Divides”

“Hymn of a Thousand Voices”

“Our New World” (with Lzzy Hale)

“The Spirit Carries On”

Photography is a passion of mine and I am blessed to be surrounded by amazing industry photography professionals. I have had the passion for photography since I was a teen back in the film days. From shooting film, developing and printing in my own darkroom, fast forward to today; I am now 100% digital. I possess a true passion for entertainment, celebrity, event and live performance concert photography, as well as fine art, photo journalistic, and street styled captures. Capturing the moment is my passion. Just me and the viewer creating and capturing moments in time.
Related ItemsCity National Grovedave safleyDream TheaterFeaturedJames LaBrieJohn AyungJohn PetrucciMike ManginiMike Portnoymodernpicson stage review
← Previous Story THRICE @ THE RAVE/EAGLES CLUB – Milwaukee, WI
Next Story → Animals As Leaders @ Bottom Lounge – Chicago, IL