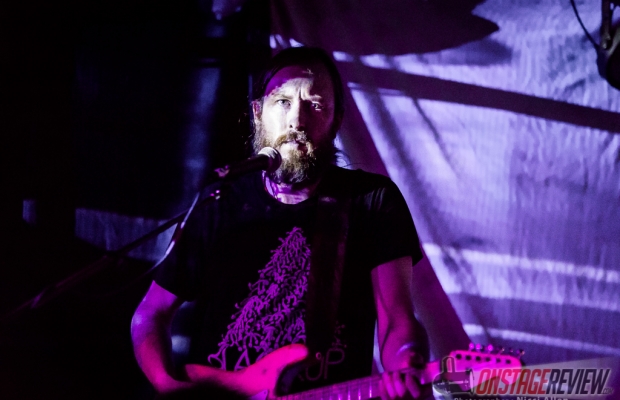 If you have never heard of Earthless, they are a mostly instrumental “stoner-rock” group from California, that sounds kind of like a mix between Black Sabbath, Jimi Hendrix, and Led Zeppelin, with more extensive jams. The three gentlemen that have comprised the band since the beginning in 2001 (Isaiah Mitchell, Mike Eginton, Mario Rubalcaba) are all influenced heavily by Japanese psychedelic rock and German krautrock. After having listened to their new album Black Heaven on repeat since it came out, I was incredibly stoked when the night finally came to head to the show.

Back-to-back nights at The Empty Bottle in Chicago were sold out for this event, which was the final stop on the Earthless tour with Kikagaku Moyo and JJUUJJUU before the band parted ways and headed to Europe. It was a Sunday night, most of the crowd in attendance more than likely had to be up early for work the next morning, and Earthless was not scheduled to go on until 11:30 PM, but that did not stop the intimate venue from being filled to capacity with eager fans. Brand new 12oz ‘Mark of the Yeast’ cans from Kuma’s Corner and BuckleDown Brewing were released first to this crowd as well, which my tastebuds enjoyed thoroughly. If all of this excitement wasn’t enough for one night, Mad Alchemy was there with their tripped out “liquid lightshow” for the full psychedelic effect.

Earthless wasted zero time before or between jams, almost running them together as if the performance was one sequential track, never once falling out of the groove. The crowd stared mesmerized in a trance of seemingly endless jams and swirling colors. A three piece band with minimal vocals might sound like a snore to the average concert goer, but there was nary a yawn in the place, with every eye fixed on the stage. I myself was afraid to blink, in fear of missing the Energizer Bunny that I expected to cross the stage at any second with the impressive vitality and endurance being displayed by these three master musicians. Just as one would expect the song to be winding down, a millionth wind would kick in and build upon the already mountainous build. I will let the video I caught speak for the rest of this review, as I go back to listening to their new album on repeat. I suggest you do the same.

Enjoy what I intended to be one short clip of the show- which ended up being an impressively complex 17 minutes long… because Earthless just doesn’t do basic.

Nicci Allen is a photography/graphic design major who has been an active and involved member of the music scene since she was old enough to be let in local shows. Whether it was bartending concerts at The Pearl Room, being an involved member of the Girls of Metal, booking and promoting local shows and benefits, attending festivals and supporting artists of every genre, or DJing and writing her own music, Nicci has always made music a necessity in her daily life.
Related ItemsBuckleDown BrewingCHICAGOconcertConcert photographyEarthlessFeaturedJimi HendrixJJUUJJUUKikagaku MoyoKuma's CornerLed ZeppelinLiveMusicNicci Allenon stage reviewPhotographypsychedelicReviewstoner rockthe empty bottle
← Previous Story ICED EARTH, SANCTUARY & KILL RITUAL @ BOTTOM LOUNGE, CHICAGO,IL
Next Story → OMD @ HOUSE OF BLUES, Anaheim, CA