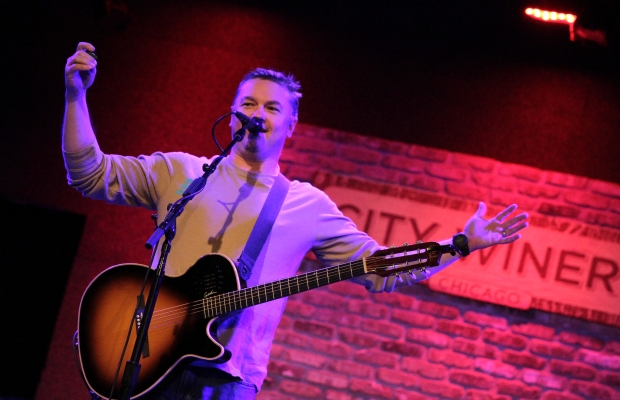 It was a fantastic Saturday night, the air was cool, the Chicago streets were buzzing with excitement and I was on my way into one of my favorite venues in this town, City Winery, to see one of my favorite artists for the past two decades – Edwin McCain.

McCain is spending most of this year playing select dates around the country.  He’s performing acoustic sets along with two other musicians who play guitar and saxophone beside him.  I’ve had the pleasure of seeing Edwin perform several years ago at a now defunct music venue called Viper Alley in Lincolnshire, Illinois.

Now seeing him twice, I can honestly say that he has solidified himself as the quintessential musician in my book.  To me, he’s the triple threat of musicianship; he writes great music, plays great music and is great with his audience.

McCain was destined for the stage, he makes himself at home and instantly makes you feel comfortable at his shows.  I’ve been to quite a few shows where you know the singer doesn’t connect with their crowd, well, it’s safe to say McCain has mastered his craft.  He also has a way of making his set list flow and is an excellent storyteller.

He sang his hits “I’ll Be” and “I Could Not Ask For More.”  Did you know that he performed “I’ll Be” at the wedding of Matchbox Twenty’s vocalist, Rob Thomas?

In between songs McCain would tell anecdotes of his life and delved right into his personal life, especially how he got kicked out of the University of South Carolina and the fact he might not be doing music if it wasn’t for that incident.

Opening for Edwin was Nashville based artist, Derik Hultquist.  I love going to shows in general, mainly for the fact that I get to hear new music from the opening acts.  Hultquist walked on stage and began singing, his voice was smooth and played eight wonderfully written songs.  He too, was a great story teller and I thoroughly enjoyed getting to know his music.  I had the opportunity to meet with him after the show where he gave me his set list.

Derik Hulquist’s Set List: Strange Love, Reckless, Back When I Was Young, One Horse Town, Darkside of Town, Three White Diamonds, Racing to a Red Light and Leaning on the Rain.

Janelle Rominski’s favorite place to be is in the photo pit. She has been to over 600 concerts and loves the feeling of being close to so many talented musicians and taking quality photos of their shows. She began her passion of “rocktography” and show reviews as soon as she could drive herself to concert venues.
Related ItemsCHICAGOcity wineryderik hultquistedwin mccainFeaturedjanelle rominski
← Previous Story ELECTRIC SIX REVIEW @ DURTY NELLIE’S – Palatine, IL
Next Story → BRET MICHAELS & BAD MEDICINE @ Arcada Theatre – St. Charles, IL