Home / FEATURE / In This Moment @ The Rave – Milwaukee, WI

In This Moment @ The Rave – Milwaukee, WI 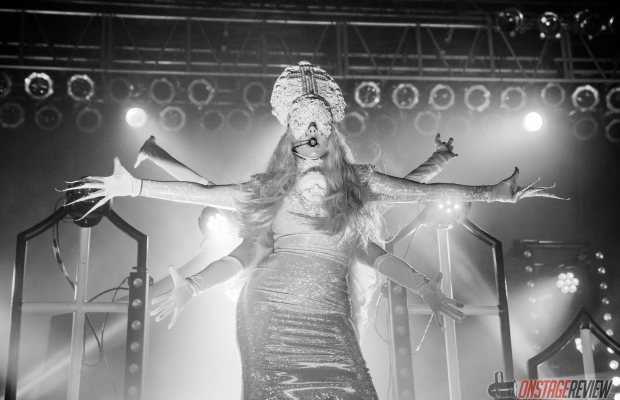 In This Moment@ The Rave, Milwaukee, WI

Over 4,000 fans filled the Eagles Ballroom last night at The Rave in Milwaukee, Wisconsin  for the opening night of the Half God Half Devil Tour featuring Gemini Syndrome, Avatar, Motionless In White, and In This Moment. With tickets sold out, it was clear that this was a highly anticipated concert featuring four bands that essentially could be headlining their own show.

By the time Gemini Syndrome took the stage to start off the night, the floor of the venue was already swarmed with fans waiting to see them. Starting the night off with two songs off of their first album release, they had the crowd in their hands from the beginning. The band was tight, high in energy, and sounding great. All making for a great performance.

Avatar with their amazing stage presence always put on a fantastic performance, one that you would never want to miss. Tonight was no exception. With the Avatar stage hands killing the lights, and singer Johannes Eckerström popping out of a what appeared to be a small circus ring the set was off to an amazing start. Playing all of their hit songs, Avatar sounded great and from the crowds reaction, they agreed. Fans were of all ages, some even dressed up with makeup similar to the bands.

The Eagle has Landed

Motionless In White had a lot to live up to with the last two amazing performances before them. Obviously, they didn’t disappoint. The entire crowd was head banging and throwing their fists in the air at one point. Crowd surfers were flying up towards the stage relentlessly throughout their performance. By the end of their set, the crowds excitement for the final band, In This Moment, was at an all time high.

Chop Suey (System Of A Down cover)

As stagehands were preparing for In This Moment to perform, a flag with the infamous black widow was raised to block view of the stage. By the time the show was about to start, the flag fell with the band posed perfectly. Starting out with a couple fan favorites, new music was debuted. In This Moment brought their A game tonight, and vocalist Maria Brink was at an all time best. It showed with the sold out venue roaring.

Last night was the first stop on the Half God Half Devil Tour, and the performance of all left us in awe. Don’t miss your chance to see all four of these great bands put on an incredible set. Check out the date’s below and find a show that’s near you! Get your tickets fast as these shows will be sure to sell out.

*festival appearance, not all bands will perform

My passion for live music started at a young age, with my first concert that I can remember going to being Anthrax. Since, I have been to hundreds of concerts throughout the years and music has always been a large part of my life. I can remember when I was younger flipping through pages of music magazines, such as Hit Parader, just to look at the pictures of the people I idolized so much – I would say that has the biggest impact on how I developed my style of concert photography.
Related ItemsballroomBrinkconcertdevileaglesFeaturedfirstgodhalfInLiveMariamilwaukeeMomentoutphotoPhotographyPhotosraveReviewshowsoldtheThisTourwiwisconsin
← Previous Story Black Stone Cherry @ The Sandlot – Green Bay, WI
Next Story → ROYAL THUNDER @ BEAT KITCHEN – Chicago, IL