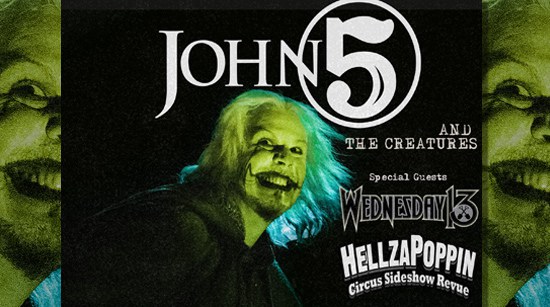 I had the pleasure of speaking with John 5 (Rob Zombie; John 5 and The Creatures) a few days before he and the Creatures embark on the Famous Monsters tour with Wednesday 13 and Hellzapoppin Circus Sideshow.

Taelyr: “I know you play a lot of TV theme songs, what is your favorite to play?”

John 5: “Oh I love TV theme songs. Let’s see, that’s a great question. The Simpsons is incredible, family guy is great. Uh what else? And then I like really old, old school ones like Brady Bunch and Beverly Hillbillies because they have such great themes and if you heard something as a kid, you know, these themes were so good, these songs were so good and so memorable that you’ll never forget them. So yeah those are some of my favorites for sure.”

T: “So what was the first TV theme song you learned how to play?”

J5: “Let’s see, maybe Batman. Na na na it was really easy and you know I think that was one of the first.”

T: “I read that you were in a band called Vamprilla back in like high school and that’s when you started experiencing with the face makeup.

J5: “Well, you know, it’s very different. I grew up, you know, I went to a very like…preppy school, if you will, so my hair was like super short I had to, you know, I didn’t wear any crazy clothes or anything like that so. But the guys in Vampirilla, I remember were all like 26 and I was like, you know, 15. I don’t think I even drove yet. And I was like ‘woah, these are like old guys’ you know. So I had to wear a black wig too because they all had really super long black hair and I just had this preppy haircut. Really funny.”

T: “Right. Seeing as you love instrumental music so much, do you have a favorite classical composer?”

T: “I can believe that, he’s one of my favorites as well.”

J5: “I mean it’s incredible, like the story. Unbelievable.”

T: “So you’ve done the film scores for Lords of Salem and 31, is it safe to say that you’re also doing the film score for 3 From Hell?”

T: “So do you have a guitar with you right now?”

J5: “Yes, there is one right here actually. I just walked to the other seat but yeah I’m looking at it, so it’s that close.”

T: “Nice. I saw just yesterday actually that Nikki Sixx is going to play bass, is he playing bass on the whole tour, or just a select few shows?”

T: “That would be an incredible show.”

J5: “Yeah. Well he played with me once at the Whiskey here in Hollywood so, it was really great.”

T: “Well you have a lot of people excited when they saw that comment, the whole internet is a buzz now.” (Laughs)

J5: “Yeah, I know. It’s, HE’S got a whole lot of, I didn’t say anything!” (Laughs)
T: “One last question. If someone came up to you and said ‘Hey, I’ve never heard any of your stuff with the creatures’, what is the one song you would tell them to listen to to get them hooked?”

T: “Thank you so much for taking the time to talk with me, I will be at the show on Thursday.”

On Stage Review will be out at The Forge on November 1st to cover this show- see you there! Tickets: www.TheForgeLive.com