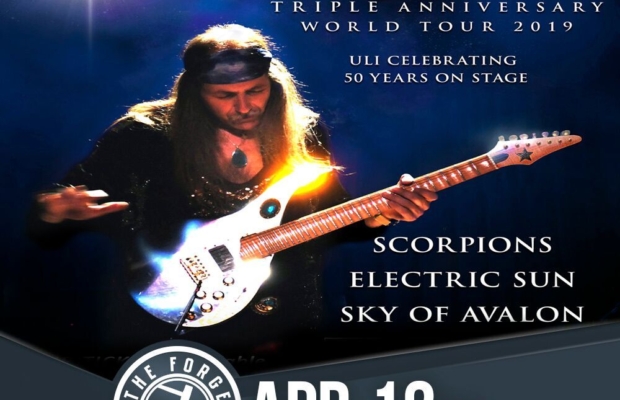 I had the opportunity to speak with Uli Jon Roth about the 40th anniversary of Tokyo Tapes and Electric Sun, his Sky Guitars, and what’s next after his 2019 tour is over.

Taelyr: “This year marks the 40th anniversary of Tokyo Tapes and Electric Sun, how does that make you feel when you hear those have been out for 40 years?”

Uli: “Well, I don’t really tend to think about it, you know? It’s a long time but I’ve been doing so many things in between that it feels like yesterday in some respect, you know? I don’t normally look back that much, sometimes a little, but most of the time I’m looking at what’s on the table now and what the future holds, like shaping the future.”

T: “Awesome. So what goes on in your mind before you go on stage?”

U: “Not much. I enter the stage usually with a very clear mind; I don’t think about anything, my mind is like empty when I go before the stage so it’s totally ready for just the music. Directly before you go on stage you have to basically get ready. Usually I tend to take a little nap just before, because I’m an early riser, and by the time that show comes I’m a little tired, you know. So taking a cat nap takes care of that and then my mind is fresh.  We play long shows, you know, we play almost 3 hour shows plus a one hour VIP show before that, so I’m on stage for like 4 hours a day. Plus interviews, plus various meet and greets, and, and…it’s a long day.”

T: “It sounds like it! So I want to talk a little about the Sky guitar. That’s something that you totally came up with, how long was the process? From the very first thought you ever had about making it until the final product?”

U: “Well, in the beginning it wasn’t really a product, because it was just a prototype, you know. Um, it wasn’t long. I had the initial idea at the end of 1982 I remember, just after Christmas, and then went to see my guitar builder and showed him the drawing and he said ‘ok, let’s go for it.’ So he built the guitar and it was ready in the spring. That was the first one, in 1983 and then we built 4 more different prototypes all of which had slightly different capabilities. One of them had a 7th string added, and then there was 20 years of nothing. I played these prototypes and that was it. Until there was a point when I got approached by various guitar companies to actually market the guitar, because it was a novel design and the guitar was able to do things other guitars couldn’t do. Initially I was hesitant because it was my own sort of personal kind of signature thing, but then I saw the positive upside it had, you know, by being able to construct new Sky guitars and start another research and development round. Because each guitar I could try out things, experiment with the wood, the shellac, with the pickups, etc, etc. That’s exactly what happened. So we put a limited edition on the market and after that I founded my own guitar company called UJR Sky Guitar, and now we’re selling them on just really internet and word of mouth only. They’re not in the shops, they are all built to order, hand built, and there is like a 1 year waiting list for anyone who wants a Sky guitar, and who can afford one, because they are very, very expensive, but to me they’re worth it.”

U: “So then quite a few other people, because several have already collected three or four Sky guitars.”

T: “That’s awesome. So I know that classical music is a big component in your music. Who is your favorite classical composer?”

U: “ I don’t have one classical favorite composer, but I mean my top five would be Mozart, Chopin, Beethoven, Bach, and number five well, that’s the joker, someone I would rotate. (Laughs) You know, but yeah, it’s pretty much these, in that order. I learned an awful lot from studying their music, and some of that ends up in what I do.”

T: “You’ve traveled all over the world, is there a place where the audience’s reaction surprised you? Maybe somewhere you didn’t think you would be well received and you were?”

U: “Yeah, I mean every country is different, every audience is different. There are some countries, like South America or, well that’s not even a country, that’s a continent! (Laughs) Let’s say Brazil, or Greece, and some others where the audience goes literally wild when we play. They just get so excited, they know all the music, you know. Then there are some countries where they are much more reserved; they let you do the talking on stage, and they will clap politely. That’s what happens in Japan, you will never see a Japanese audience freak out about what you do, but inside it goes very deep with them because they are very knowledgeable and they listen and it means a lot to them. So some audiences I find are more superficial and some are more deeper listeners, you know. North America, particularly the states, is kind of in between depending on where you play. I love playing to American audiences because usually they go with you all the way, and they just trust what you’re doing and then you can do anything and they just go with you. If I play in Europe and Germany, I would be a little more guarded. I wouldn’t do a three minute guitar solo; I would do a two minute guitar solo. But I have to say I do enjoy playing here, I guess for that reason because there is an added level of freedom here when it comes to musical performance. I don’t know if that makes any sense, but that’s the best way I can answer your question.”

T: “You’re touring North America until I believe the end of May, then you’re doing some shows over in Europe, but what are your plans after this tour is over?”

U: “I’m going to work on a new album, and there are already other tours in the making that are not yet online, but yeah those two things. At the moment, I’m concentrating on we are having two new prototypes built for the Sky guitar so that’s very exciting for me and I get to play them in concert. So that’s pretty much it for this year.”

T: “That sounds exciting; it sounds like new music is coming.”

U: “It has already come; I just have to record it.”

T: “Awesome! The last thing I would like to ask you is if someone came up to you and told you they had never heard any of your solo music, what is the one song you would recommend they listen to?”

U: “I’ve got no idea. Because all of my songs are like so different from each one another, and that’s usually the way I think. Musically I don’t like to repeat myself and every album is completely different. Different albums speak to different people, you know and there are some of my audiences who embrace all of my stuff.  But there are also quite a few who say ‘well, I prefer the Scorpions period’ or ‘I prefer the Electric Sun period’ or ‘I prefer more classical stuff’ so I never know what to say when someone asks me this question. It depends really on what music they like in general, and then I might point them roughly in the direction but I can’t really think about any song or album like that.”

T: “Well, that’s all I have. I will be at the show tomorrow night so I’m really looking forward to that. You and everybody you are traveling with, I wish you all safe travels for the rest of the tour.”

U: “Oh, thank you so much! Alright, see you tomorrow!”