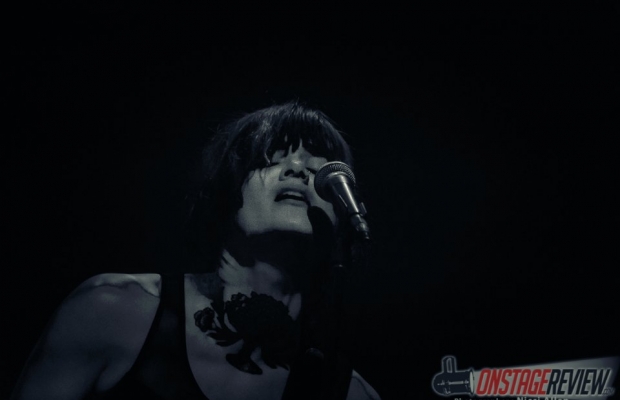 Royal Thunder is a progressive rock band from Atlanta, Georgia that combines a massive wall of sound with a psychedelic twist and an unearthly amount of vocal emotional expression. This band brings forth an unbelievable amount of power for their fans live. With drawn out heavy distorted parts and beautiful atmospheric effects reminiscent of early Isis, Pelican, and fellow Georgians Kylesa and Baroness, this band is carving its way through the world of metal at a rapid rate.

Not only did this group show off their unparalleled chemistry with one another both rhythmically and melodically, but their dynamics from one musician to the next were as conversational and expressive as any veteran musician that’s been playing for 40 years or more. Even on the more complex parts where all 3 guitarists were hitting multiple pedals and the drummer was bringing more and more energy into the mix, they all managed to give each other plenty of space to speak without getting in one another’s way.

Although the entire band is compiled of fantastic musicians, I think one particular member is not given the credit that she truly deserves as an artist and as a singer; Mlny Parsonz not only pours her heart and soul out with every second of the bands performance, but has the pipes to handle such an insane amount of abuse. Once I got the chance to see her up close and personal I realized that the sky is the limit for Mlny and her band mates. With many similarities to some amazing voices like Florence Welch, Bjork, and even Adele, yet still holding onto her metal and grunge roots that give her that edge that many vocalists just don’t have, I think Mlny could carry Royal Thunder to the top of a lot of metal charts. Although their recordings are well done, if you get a chance to experience this show live, I strongly recommend it. Keep an eye on this band in the next few years. I expect great things to come.

Dan Scheiman With an entirely open and unbiased obsession with music, Dan decided to take the opportunity given to him to share his thoughts for On Stage Review. Having been to hundreds of concerts of a variety of styles and genres over the years, he's no stranger to live music. He has been playing bass guitar for over twelve years now and has been dabbling in vocal work, drums, and piano for almost as long. Growing up listening to metal and industrial then transitioning into jazz and classical, and now having a particular love for funk or anything that grooves; his perspective comes from a well-rounded musical background and some amateur experience as a musician. He has too many favorite bands to list, but some of his favorite live experiences include: Sigur Ros, Porcupine Tree, Papadosio, Tool, The Ocean, Animals As Leaders, Lettuce, and of course, Victor Wooten.
Related ItemsCHICAGODan ScheimanFeaturedLive ReviewMetalMlny ParsonzNicci AllenOnstage reviewPhotographyReviewRoyal ThunderThalia hallthe Sword
← Previous Story PUSCIFER @ RIVERSIDE THEATER – MILWAUKEE, IL
Next Story → SHAMAN’S HARVEST @ Route 20 Outhouse – Sturtevant, WI