While Tammy and Kat were in Rockford attending The Band Perry concert, I was two hours down the road attending a concert of a different kind in Chicago. Yes, there was a rock star, yes he had a microphone in his hand, but there were no instruments on stage and no songs being sung.

Scott Ian, the axe man of metal band Anthrax, kicked off his North American “Speaking Words” Tour at Mayne Stage on the north side of the Windy City. The two-and-a-half hour evening flew by so quickly as Ian told crazy stories of his 31-years in the music industry.

The venue was full of fun-loving music fanatics ready for a raucous time. The stage was simple, there was a table with a laptop with a blue toy dinosaur next to it, two bar stools – one empty and one holding Ian water and beer, a microphone, spotlight and a huge projection screen with the ‘logo’ of the show reading “Scott Ian, Extra Metal – Speaking Words Tour 2014.”

Ian walked on stage, sat down on his stool, and began speaking… words. The screen behind him was used the entire duration to display different cartoon-like drawings, photos and videos of his life to correlate with the stories being told.
He opened with a killer story on the first time he met Lemmy from Motorhead at a bar, drinking for one of the first times, and how that turned into the worst hangover of his entire life. Not only did he wake up the next morning throwing up all over the place, but he had to get on a plane from Heathrow in London and fly to Munich, Germany to begin his promo tour. He got on the plane still reeking of booze and spent quite a while in their bathroom praying to the porcelain god.

Upon arrival in Munich he got to his hotel room and a German doctor came in with a giant “syringe with stuff in it.” “You need this,” the doctor explained to him. Ian said “No fucking way,” however, the doctor pushed the needle in his skin and “within a minute, a warm sensation came over my body. I slept 16-hours and felt great.” The humungous hangover had delayed the promo tour, but at least Ian got back on track and rocked his way across the globe.

The speaking continued and he touched base on his time where he and Lemmy were extras in HBO’s TV show ‘Deadwood’ in 2006. Other topics of discussion included his wild time going 130 miles per hour as a passenger in the Nissan sports car of Al Jourgensen of metal band Ministry. Ian also talked about meeting his wife, Pearl Aday, whose father just happens to be the singer, Meat Loaf.

As Ian isn’t a big drinker, when he found out that he was touring with Pantera for two months, he got on a plan to build up his tolerance to alcohol. He let Dimebag Darrell Abbott train him. The first few weeks were tough, but eventually Ian was able to down a bottle and not be incoherent. He wasn’t an alcoholic; he just got better at handling his liquor. He could go out and not make a fool of himself like in the past and he owes it all to Dimebag. Ian notes that he doesn’t have an exact favorite moment with Dimebag, but that he’s the consummate host. He’ll do anything to make sure you have a good time.

After reminiscing about Dimebag, Ian transitioned into telling more hilarious stories and concluded the night with a question and answer session. During the session a show attendee appeared to be filming video on his cell phone and my most favorite moment of the show happened. Scott Ian called him out on it and made a poignant comment that he wished people would get out more and experience live music, live events, live things and not just sit home and watch YouTube. It’s not the same experience.

Once the Q&A began Ian was asked a plethora of questions, including his least favorite band (WASP), favorite cities to perform in (Chicago, San Francisco, Milwauke and LA) and more.

He touched on the importance of being a father to his son that was born in 2011. Ian said being a dad is the greatest thing he has ever done. He said that “once that head popped out, things changed”. He would jump in front of a bus for his child. He’s the most important thing in his life and that “having a child also renews your hatred in mankind.” He jokingly said he was becoming a softie, but even though he’s been in a metal band for three decades and performed hundreds of shows, “the world became a scarier place when you become a dad.”

I could go on and on about the multiple stories Ian told, but this fall, you’ll be able to get a “fleshed out version of the show” in Ian’s new book, titled “I’m The Man”.

After the show was officially over, Ian met with fans for a paid meet & greet and he couldn’t have been more genuine. He took the time to talk to each person individually, sign memorabilia and pose for photos. 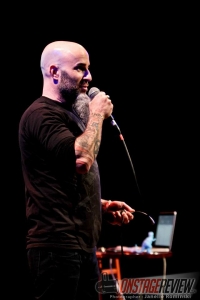 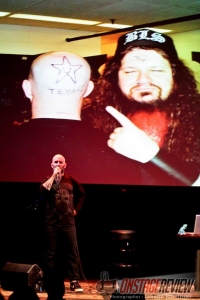 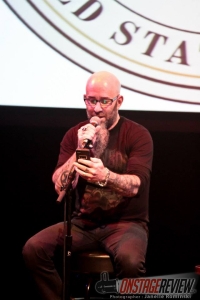 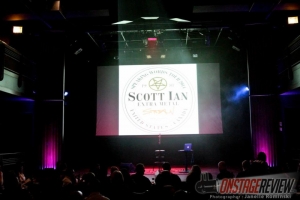 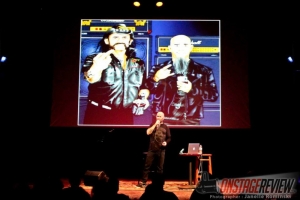 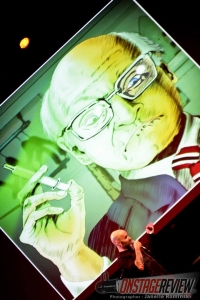 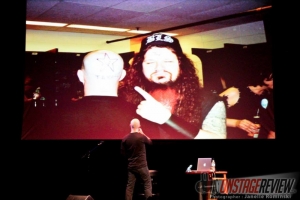 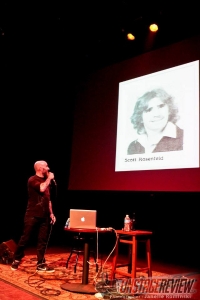 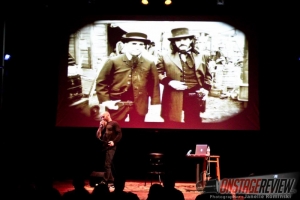 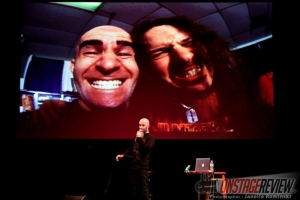 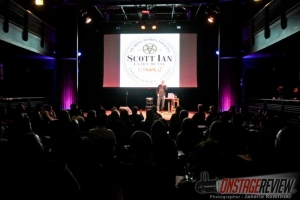 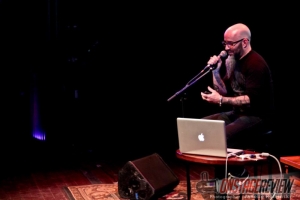 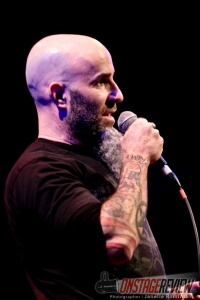 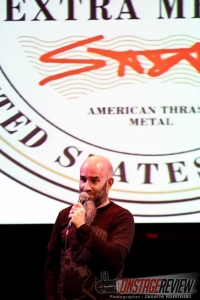 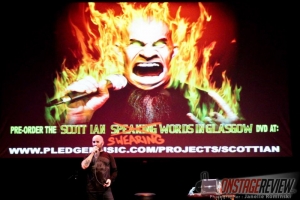 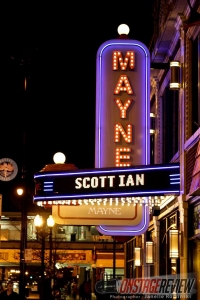 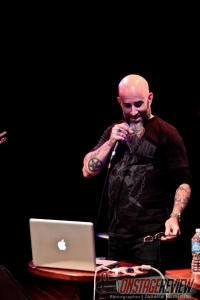 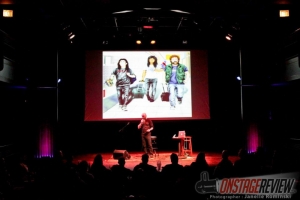 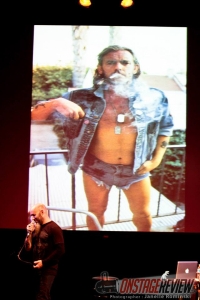 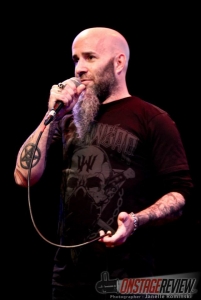 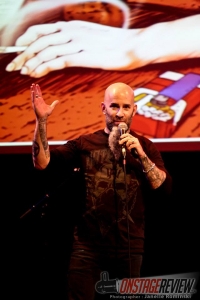 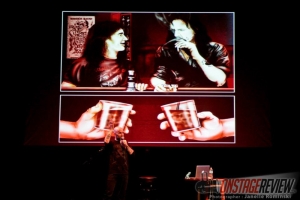 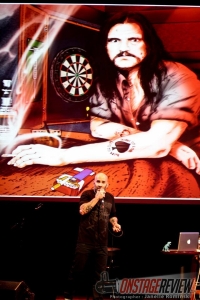 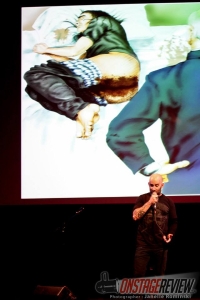 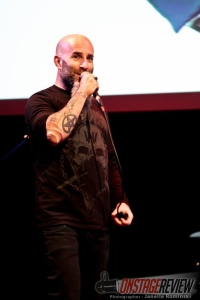 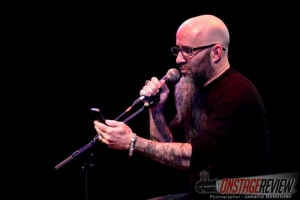 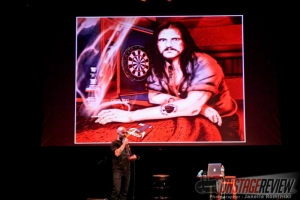 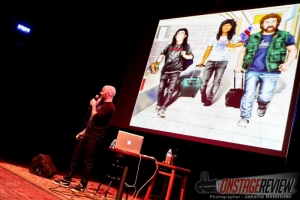 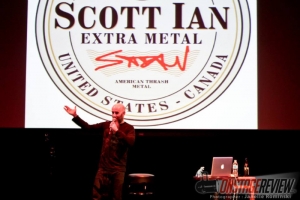 Janelle Rominski’s favorite place to be is in the photo pit. She has been to over 600 concerts and loves the feeling of being close to so many talented musicians and taking quality photos of their shows. She began her passion of “rocktography” and show reviews as soon as she could drive herself to concert venues.
Related Itemsanthraxdimebag darrelljanelle rominskilemmymayne stagemeat loafmotorheadon stage reviewpanterapearl adayscott ianspeaking words tour
← Previous Story WORLD’S LOUDEST MONTH
Next Story → SICK PUPPIES @ Mojoes – Joliet, IL