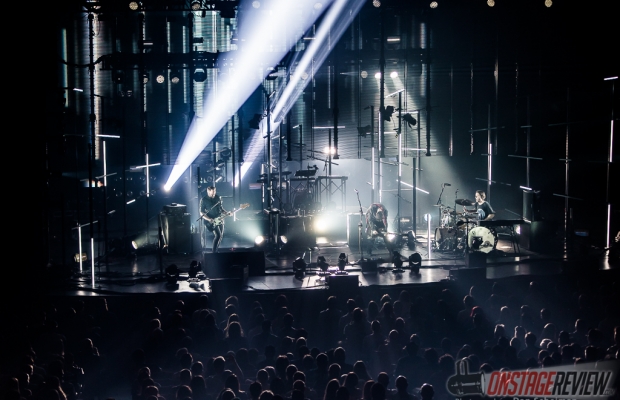 While some listeners who are unfamiliar with Sigur Rós may consider them to be similar to other post-rock groups such as Mogwai, 65daysofstatic, or Hammock, this band is certainly a pioneer of their craft and a group of musicians that have been developing a unique and nearly indescribable sound with great precision since 1994. Many have followed the brilliant light that emanates from this group of artists, but no one has been able to emulate it as far as I have ever heard.

One of my all time favorite aspects of music to experience in a live setting is the “wall of sound” effect. While many bands do this well, Sigur Rós has forged an entirely new weapon over their many years of experimentation and orchestral incorporation within their music. This group, while not being considered a metal band, puts together just as intense of an auditory and emotional tidal wave as many of the greats. Even without the shredding or growls, Sigur Rós would be able to go toe to toe with bands like ISIS, Yakuza, Russian Circles, and even The Ocean in terms of the emotional intensity that the fans experience live, and the psychological endurance that is needed to get through the entire set.
After just the second song, I found myself entirely overtaken by layers of beautifully mixed sound and every single nerve in my body was beginning to tingle. They began the show very slow on purpose. This would allow for the crowd to grow accustomed to the water just as you would put your feet in a cold pond for a bit first before diving in completely. Little did these fans know that just as they were beginning to get comfortable with these soothing and wonderful sensations, they were going to be mercilessly shoved into the water to be engulfed by one of the most powerful displays of music and human emotion that can be found today. Accompanying all of this was the absolutely mind-numbing visual presentation that was arranged along with it.
Jón Þór “Jónsi” Birgisson was leading the band on stage, sweating, and quite possibly even crying at times if my eyes were telling me the truth, all while pouring every ounce of his emotional self into each and every movement of his violin bow that he played his guitar with. As if the musical expression wasn’t enough, this man’s falsetto vocal range and technique was something that needs to be seen to believe. His voice pierced right through the very top of the mix with an angelic construct that was nothing less than surreal.
After two full sets blending seamlessly together into one gradual yet perpetual crescendo, Sigur Rós brought forth a climax that was the most expressive and blindingly emotional release that they could have possibly pulled out of themselves. The final five minutes of their set was nothing short of therapeutic. Something inside me was shaken loose that night, and I am grateful to everyone in this masterful project for allowing me to be a part of this. It is artists like these that flood me with nothing but gratitude just to be able to experience such masterful works. If you are looking to experience a concert unlike any other and you are willing to take a ride on an emotional roller coaster during the process, I strongly suggest you manage to find yourself at the next Sigur Rós show in your town.

Nicci Allen is a photography/graphic design major who has been an active and involved member of the music scene since she was old enough to be let in local shows. Whether it was bartending concerts at The Pearl Room, being an involved member of the Girls of Metal, booking and promoting local shows and benefits, attending festivals and supporting artists of every genre, or DJing and writing her own music, Nicci has always made music a necessity in her daily life.
Related Items65daysofstaticAuditorium TheatreCHICAGOconcertDan ScheimanFeaturedFilmoreicelandicIsisjournalismMogwaimusic newson stage reviewPhotographyReviewrussian circlesSigur RosYakuza
← Previous Story MASTODON, EAGLES OF DEATH METAL, & RUSSIAN CIRCLES @ ARAGON BALLROOM – CHICAGO, IL
Next Story → RODRIGO Y GABRIELA 10 YEAR ANNIVERSARY @ VIC THEATRE- CHICAGO, IL