By Taylor Regulski on August 18, 2018@www.twitter.com/The_CameraLady 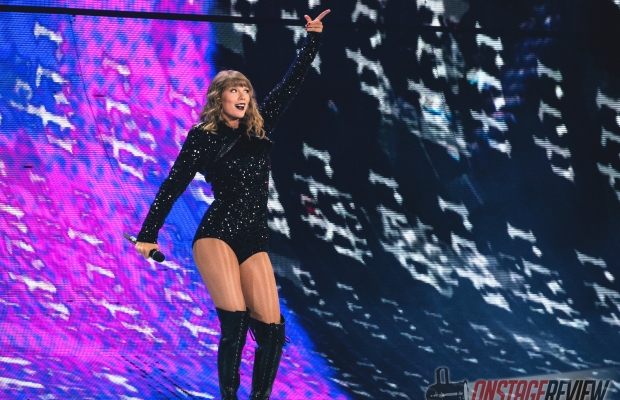 What do snakes, unicorns, detectives, and Olaf the Snowman have in common? The answer is Taylor Swift. More specifically, the Reputation Stadium Tour.  Fans came out sporting all of these outfits, the number 13, light up signs, and more.  Tuesday night the 28 year old pop star had her first Florida stop for the Reputation Stadium Tour in Tampa. For me, this was my 5th Swift tour that I have attended and she has truly become a performer that will be remembered for years to come.

Swift hand selected her openers Charli XCX and Camila Cabello for their high energy, catchy tunes, and girl power attitude. Charli XCX kicked off the night with her radio chart topper, Boom Clap. Following this, the English pop star had the crowd jumping and screaming “I don’t care!”  as she sang I Love It which she wrote for Icona Pop. The singer continued to keep the crowd on their feet as she sang a throwback of Break the Rules. Charli XCX’s set was a continuous dance party which ended with a friendly reminder of how fancy she is as she belted I’m so Fancy.

The heat of the party continued to rise when Camila Cabello took the stage. It’s hard to believe that the pop star did not start out as a solo artist with a stage presence as strong as hers. Once one fifth of the group Fifth Harmony, Camila opened with her catchy Never Be the Same. Backup dancers soon joined her on stage as the sang She Loves Control. While Tampa may not be her native Florida home, Camila was feeling the love from all the screaming fans. The 21 year old closed with her top hit Havana, an ode to her home land of Cuba. Miami will be in for a treat when the native returns on Saturday night for the next stop on the Reputation Stadium Tour.

Joan Jett’s famous Bad Reputation set the scene for the queen of the night. As the song ended, the lights dimmed, and an opening video sequence began. The saga culls through Swift’s life and the hits her reputation has taken. Segments began to focus on an outline of Swift as she is called fake and a cunning fox.

The first note of Swift’s …Ready for It? hits and her massive stage screens open for the singer to emerge. Glistening in a sequined romper and in the middle of big bold spotlights, Taylor asks her sold out stadium “Are you ready for it?” After 4 Taylor Swift tours, Reputation being my fifth, any Swiftie will tell you, we were not ready for it.

Taylor is a pro at performing to sold out shows but, since this was her first album and tour in over 3 years she knew this one had to be BIG. The pop star came out with a bang as she performed her second song, I Did Something Bad. Fireworks and fire continued to build as the pop star sang the sultry lyrics “I did something bad, but why’s it feel so good?”

Swift toned down the crowd with her next few performances of Gorgeous and a medley of Style/Love Story/You Belong with Me. Taylor couldn’t let the party cool down for too long and needed to remind everyone that the old Taylor was dead. A giant Snake emerged for her performance of her popular, Look What You Made Me Do and End Game.

Fans could tell something big was in store as a Taylor made a quick costume change after her performance of King of My Heart. The pop star emerged in her iconic flapper inspired rainbow dress and sang her radio ballad Delicate as she soared over the stadium on an elevated platform  to her first B-stage. Swifites roared as Camila & Charli XCX joined Taylor to Shake It Off as she created a more intimate moment for fans in the back.

For those of you not familiar with Taylor Swift shows, the platinum artist loves to see every single person in the audience. To make this easier all attendees get light up bracelets which dance along with the music and she visits her B-stages for fans in the back to get a front row view for a few songs.

At this point Swift likes to go back to her country roots and play a few acoustic songs, notably Dancing with our Hands Tied and a surprise song. Tuesday night Swift explained that her choice for her secret song came from the inspiration of a fan who told her he use to listen to this song to give him strength before coming out. That exact fan was in the audience at Tampa and she decided to play it for him. The crowd went WILD as Taylor began to play Invisible off of her debut album Taylor Swift.

The surprises didn’t end there as she greeted fans through a path to cross over to her second B-Stage. Here, Swift performed her popular Blank Space followed by her sensual Dress. She once again soared above the stadium in a Snake as she belted a Bad Blood/Should’ve Said No mashup.

The highlight of the night came before Taylor’s next performance.  August 14, 2018 was highly significant since it was the day that she won a single dollar in her sexual assault case in 2017. For the first time she spoke candidly to her fans about the difficulty she faced. Swift gave a heartfelt speech to the sold out stadium about the importance of speaking up and being an advocate for those who may be scared to speak. An emotional Swift thanked her fans as she shed a few tears and  closed with:

“I’m so happy to see you and to have you and know you through the ups and the downs in my life. (crying) Sorry, I just haven’t really talked about it, and so I’m just not composed at all.”

Fans responded with a thunderous applause and held up dollar bills along with hand crafted singles sporting Taylor’s Face with the phrase “Today I stand with Taylor.”  After composing herself with a smile the singer continued to play on piano and sing her Long Live/New Years Day medley.

The final act was insight for Swift while a video interlude voiced over by the singer played explaining “Why She Disappeared.” The intro led into Getaway Car  and Call It What You Want. Taylor always make sure to end her performances on a high note, and that’s exactly what she did with a classic mashup of We are Never Ever Getting Back Together  and This is Why We Can’t Have Nice Things. Fireworks lit up the sky and Swift held her head high and took a bow.

By far this was the most impeccable performance I have seen from any performer, and Swift herself, in years. Three days later and I am still singing the songs in my head and rewatching every video on my phone. Let me tell you, as a Swiftie for 13 years, the wait was well worth it. While we may all love the Old Taylor, this New Taylor knows how to light up a crowd, throw a massive sing-along party while still sharing her kindhearted nature and love for her fans.

If you haven’t, I HIGHLY encourage you to buy tickets to one of the last stops on the Reputation Stadium Tour. Swift and her crew will be stopping by Miami tomorrow evening where you can definitely expect more surprises and maybe even a surprise guest!

While we may miss the old Taylor we must remember… in the death of her reputation, she felt truly alive.

Taylor was born and raised in Chicago which had a huge influence on her musical taste growing up. She quickly fell in love with everything about music and the concert scene and has travelled across the country attending music festivals and concerts ever since. While in college, she began to combine her love for music and photography. She currently lives in Orlando, FL. working as a sports photographer at ESPN.
Related Items13ACOUSTICbig reputationCamila CabelloCharli XCXCharlie XCXConcert photographerConcert photographycountrydelicateFeatureFeaturedFeatured photographerFloridalive concert photographerLive Music PhotographyLive PhotosLive Reviewslook what you made me doMiamipopPop starRaymond James Stadiumreputationreputation stadium tourRockSwiftiesTampaTaylor Swift
← Previous Story MELVINS @ PARK WEST – CHICAGO, IL
Next Story → GOV’T MULE @ HOLLYWOOD CASINO AMPHITHEATRE – TINLEY PARK, IL