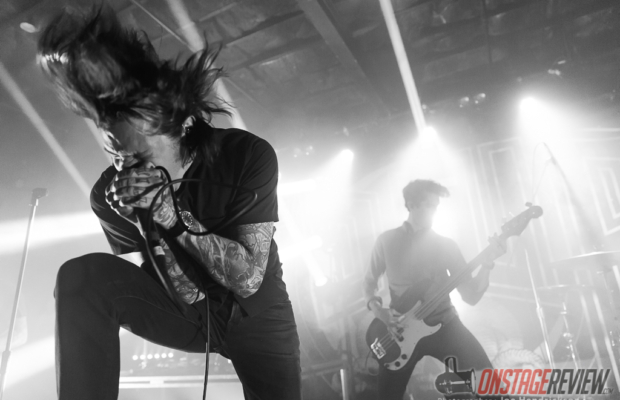 On an unseasonably cold Chicago night, The Devil Wears Prada, Norma Jean, and Gideon came through the small, but loved, Bottom Lounge on November 15, 2019. These bands took off on their “The Act” tour with Chicago being the second to last stop and they easily sold out the venue. This was my second time at the venue and it’s perfect for fans that want to be up close and personal with the artists, as well as having great sound and light shows. With the amount of equipment on stage, it pushes the bands further to the front and even stepping onto the barricade to be right over the fans.

Gideon is a hardcore metal band, based out of Tuscaloosa, Alabama, that has made its way up through the metal and hardcore scene since 2008. With the bands heavy hitting guitars and bass chugging along, fans banged their heads and moshed along throughout their set. Their lights were very dark with a magenta and blue blend, which stays consistent for a lot of the metal bands that I’ve seen. Without much room on the small stage, they got right up in front of the fans and on the edge of the stage. In my opinion, a good comparison with these guys would be Hatebreed with Daniel McWhorter’s deep and powerful scream over the bands breakdowns and low tuned riffs. The room was still filling up throughout their set but it was pretty packed by the time that they were finished, which only added to the moshing. Their fifth studio album, Out of Control, was released on October 11, 2019.

The “Almighty” Norma Jean could easily set out on their own tour and probably sell out a similar venue on their own as well. Norma Jean and The Devil Wears Prada is a great lineup for fans of this genre because they fit so well together. There were just as many fans there for Norma Jean as there were for The Devil Wears Prada. The band has been around since 1997 and has been at all type of festivals, including Ozzfest, Mayhem Fest, Warped Tour, etc. Norma Jean was an absolutely blast to photograph with singer Cory Brandan headbanging and running around like a mad man and reaching to the fans, stepping on the rail or getting down on the barricade with the crowd. The show started dark and ominous but led into brighter lighting throughout the rest of their set. They started off the night with “I. The Planet,” and played songs from their various albums like, “Blueprints from Future Homes,” “[Mind Over Mind],” and ending the night with, “Memphis Will Be Laid to Waste.” This band is absolutely fantastic live and just as good, if not better, than when I saw them back in 2006 at Ozzfest. Check out their recent album, All Hail, which was released on October 25, 2019.

Headliner, The Devil Wears Prada, is currently touring in support of their new album, The Act, and they decided to open their night with a new song from the album, “Switchblade.” Personally, I think that this band performs even better live than they do on their albums and it speaks a lot to artists who can accomplish this. With the smoke filled stage surrounding the musicians, the beams of light shining through over the crowd. At some points in the show, the smoke is so thick that it’s difficult to see some of the musicians in the back but it just adds to the overall vibe, especially with the strobe lights making the artists complete silhouettes.

Throughout the set, the band instructs the fans to continue the mosh pit, which the fans are happy to oblige. The venue was hot and the fans were sweaty but that didn’t stop anyone from stopping, some just ended up taking their shirts off and kept enjoying the music. On top of the moshing, the crowd surfing was in full effect with fans going one by one towards the front of the stage with security grabbing them over the barrier. Their most recent single, “Chemical” is a little on the softer side and most of the vocals are done by guitarist, Jeremy DePoyster, where the crowd was singing the song back to the band in perfect harmony while waving their hands. Towards the end of the night, the band played a fun cover of, “All My Life” by the Foo Fighters and it sounded great. It took me a little bit off guard because it was very unexpected but was a lot of fun to listen to with Mike Hranica and Jeremy DePoyster sharing the clean vocals versus screaming. The band finished their encore off with, “Hey John, What’s Your Name Again?” from the Plagues album, which leaves everyone going home on a high note and with high energy.

The night was hot in the venue but cold outside and was a lot of fun for a fall-ish evening in Chicago with some fun bands and music. Feel free to check out all of the bands with the links provided above and see them live whenever you have the chance!

Also, it’s recently been announced that they will be playing at the Chicago House of Blues on March 5, 2020, if you’re interested.