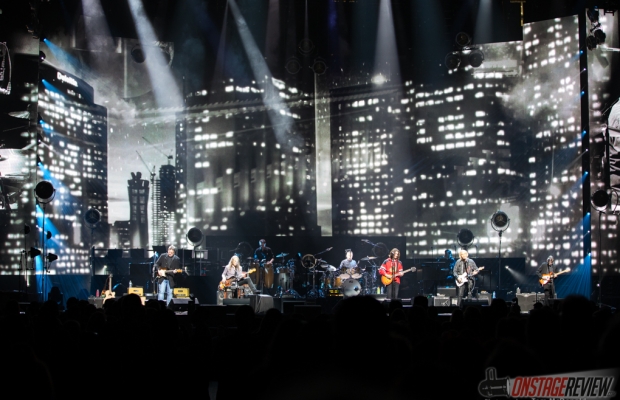 The Eagles were among the prominent soundtracks to my teenage years in the 1970s so it was a great pleasure to photograph them and see them live in concert for the first time.  With over 150 million albums sold, The Eagles are the fifth highest selling music act of all time and the highest selling American band in U.S. history.  Their “Greatest Hits (1971-1975)” was the best selling album of the 20th century in the US with 42 million copies sold.  “Hotel California” sold over 32 million copies.  The current lineup of the band includes founding member, Don Henley, (vocals, drums, rhythm guitar), Joe Walsh, who joined the band in 1975 (vocals and lead guitar), and Timothy B. Schmit, who joined the band in 1977 (vocals and bass guitar).  They were joined by Glen Frey’s son, Deacon who replaced his father following his death in 2016 and country music star, Vince Gill in addition to numerous backup musicians and vocalists.  Suffice it to say, there was no shortage of talent on the stage.

The Eagles soared through a 27 song, 2 ½ hour set including many of their hits and added a few surprises including “Next Big Thing,” a Vince Gill cover, “Ol’ ’55,” a Tom Waits cover and “Funk #49,” a James Gang cover.  Joe Walsh’s “Life’s Been Good” was also a highlight of the evening.  Deacon Frey and Vince Gill traded lead vocal chores for the evening.  Both Don Henley and Joe Walsh are 70 years old but play as if 20 years younger.  It was really great to see Deacon Frey step into his Dad’s shoes.  The 24 year old heir to the throne was clad in a Chicago Blackhawks jersey, and with his shoulder length brown hair looked remarkably like his father at a similar age when Glen and Don Henley gave birth to the Eagles in Los Angeles in 1971.  Deacon has an appealing voice which synchs up beautifully with the Eagles’ catalog of brilliant harmonies.  Equally his guitar skills are exceptional.  Vince Gill, a huge star in his own right, adds another dimension to the touring lineup and further expands the band’s audience.  Gill has a low key stage presence and let the two stars – Don Henley and Joe Walsh create most of the visual impact.  Nonethless the addition of Deacon Frey and Vince Gill actually gives the band a fresh and rejuvenated shine transcending an otherwise “greatest hits” package on the back of Henley and Walsh and the deep catalog of hits.

Always my favorite Eagle, Don Henley was all over the stage alternating between the drum kit and guitar and singing lead vocals on “Witchy Woman,” and the massive hits, “Life in the Fast Lane” and “Hotel California.”  Joe Walsh was masterful over the course of the set, both visually striking and watching closeups of his guitar artistry on the massive video screens above the stage.  Walsh’s vocals were strong as ever.  In 2011, Rolling Stone Magazine named Walsh as #54 on its list of “100 Greatest Guitarists of All Time.”  The great bassist, Timothy B. Schmit was hobbled with a leg injury from a fall in the shower and sat during the set with his leg propped up on a stage monitor.  The sold out audience in Chicago was on its feet during the encores singing every word of “Hotel California,” Joe Walsh’s “Rocky Mountain Way” and the perennial favorite, “Desperado.”  Overall, the concert was magnificent, well produced with numerous back-up musicians and singers adding a richness and wall of sound and delivered something for everyone.  The Eagles continue their arena tour to be followed by a summer stadium tour performing with James Taylor, Jimmy Buffet and Chris Stapleton.

JD & The Straight Shot kicked off the evening playing to a sparse audience who knew the Eagles would appear at 8:00pm.  The band is fronted by the richest touring musician in the world, James Dolan who made his bacon not on the stage, but in the Boardroom.  Dolan, who reportedly is worth $1.5 billion is the Executive Chairman of The Madison Square Garden Company and MSG Networks.  In this role, Dolan oversees all operations of the businesses and supervises the day-to-day operations of its professional sports teams, the New York Knicks and the New York Rangers.  But music was Dolan’s first passion.  And with the capital to fund recording projects, producing six studio albums and the music relationships to secure opening slots for some of the world’s biggest touring acts like the Eagles, Dolan has been having a blast.  God bless him.  He apparently takes a lot of incoming shrapnel from crazed Knick fans over personnel decisions, but he is clearly able to leave the Boardroom behind when he hits the stage.  The band performed a fine 10 song set culled from their six album catalog, including their latest 2017 release, “Good Luck and Good Night.”  The band has an “Americana” sound with acoustic guitar, banjo, harmonica and violin.  The 62 year old Dolan was animated on stage interacting with his seasoned Nashville band mates.  Dolan’s vocals on selections such as “Redemption Train” and “Better Find a Church” were solid and his band exceptional.

Tom is a Chicago based aerial and live music photographer in addition to his day job as an investment banker. His aerial photography has been featured in numerous travel and tourist publications and his work can be found in collections across the country. He started writing concert reviews and photographing live music as a journalist at the Michigan Daily, the student newspaper at the University of Michigan and as a stringer for the Detroit Free Press in the 1980’s, and dreamed about being a writer/photographer for Rolling Stone magazine. But he switched to a business degree, and after a 30 year career in the finance world, is thrilled to be back in the game shooting and writing about live music. Tom grew up in Detroit on the music of Stevie Wonder, Marvin Gaye, Aretha Franklin, and Motown, and has a deep appreciation for hip hop, jazz and rock. He sees dozens of live concerts and shows a year at venues all over the Chicagoland area. He looks forward to sharing his work with OnStage Review readers. Instagram @tmcd.chi
Related ItemsFeaturedJD & The Straight ShotLive Music Photographyon stage reviewOSRThe EaglesTom McDonald PhotographyUnited Center
← Previous Story THE GLORIOUS SONS @ SCHUBAS TAVERN- CHICAGO, IL
Next Story → WALK OFF THE EARTH @ THE FILLMORE, DENVER, CO