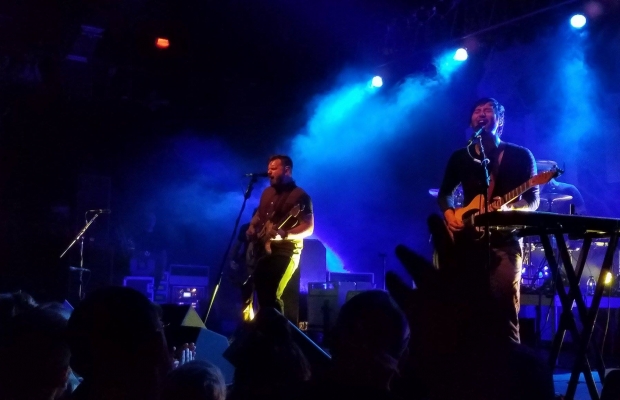 After a four year hiatus, Thrice has returned. While the band hinted from the beginning that their break would not be permanent, it was still a bit of a surprise to see them announce a slew of festival dates across the country last year. This was not to be a short-lived tease of a resurgence however as they are now touring in support of their newly released opus To Be Everywhere Is To Be Nowhere, making a stop on the second leg of the national tour at The Rave/Eagles Club in Milwaukee.

Thrice pulled heavily from the new release for the night’s performance, starting the set off with the torrential album opener and standout “Hurricane”, as the delicate picking of guitarist Teppei Teranishi in the verse abruptly gave way to the thunderous rhythm of the brothers Breckenridge, bassist Ed and drummer Riley. All of the new tunes were enthusiastically received: current modern rock radio single “Black Honey” was eagerly consumed by the spirited crowd, who also shook the old building as they bounced in unison to the stomp of political firebrand “Blood on the Sand.” A stunning highlight was new track “The Long Defeat”, where frontman Dustin Kensrue led the entire audience in a sing-along of the refrain in the outro before backing off as hundreds of voices took the lead and the words “together we’ll fight the long defeat” repeatedly reverberated off of the walls over the haunting fading music.

Of course the band did not only focus on their recent output, ripping through essentials such as “Deadbolt”, “Silhouette”, and “Artist In The Ambulance” with a youthful ferocity to the delight of the devoted. They also managed to sprinkle in a couple surprises, from the devastating beauty of tracks such as “Wood and Wire” and “Daedalus” to the unbridled fury of “Hoods on Peregrine”. Thrice have always been masters of constructing a setlist that will please all involved. They have the uncanny ability to mix new songs into the fray in such a way that they feel like they have been part of the band’s repertoire forever, bring older songs back into the mix as if they were never gone, while still always hitting the familiar beats that the hardcore fanatics are demanding. Case in point is perennial closer “The Earth Will Shake” from the album Vheissu and how it almost feels like a cherished tradition the way it ends every show.

Thrice has changed a lot over the years, but somehow they are able to retain their fans through every era of their career. They have built up a trust with their following because of their genuine and heartfelt approach to their music. This is what enables them to take a four year hiatus and still have everyone waiting for them the second that they return. The faithful have been rewarded for their patience with a cohesive and relevant new album and a tour that has felt like a gathering of old friends and family reuniting. They were truly missed in their absence, and here’s to hoping that it isn’t another four years until they come around again.