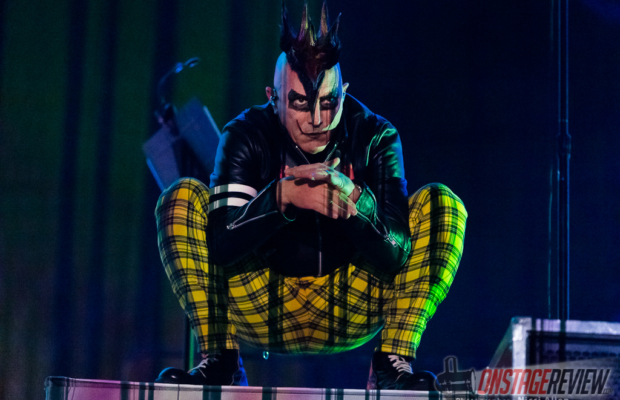 Talk and rumors of a new Tool album went on for so many years, that fans started to believe it was never happening… but it did, and Tool is back with FULL force. They’re back so hard that they are breaking records across the board after releasing all of their catalog digitally, and their first album in 13 years. Tool became the first band to occupy all ten spots of Billboard’s rock digital song chart, and their single “Fear Inoculum” became the longest song in history to make to Hot 100. It was NO surprise that when this tour was announced the dates sold out in minutes. Just as the new album was an immersive, enrapturing and deeply emotional journey from start to finish; the show followed suit. Fear Inoculum is just the medicine this world needs.

Opening up for Tool was England’s Killing Joke, which would be my first time seeing them. There are so many shots of singer Jaz Coleman in my photo gallery below because his full-on animated performance is that glorious. Every member of the band was dialed-in and in sync with the pounding bass. Jaz reminded me of a mix between Alice Cooper and Trent Reznor, and I can see both of those elements in the music as well. I only got to catch the first three songs, but from what I saw I was definitely intrigued to dig further into their discography.

As we waited for Tool to come out, a long cascading hanging curtain running on a track began to enclose the curvature of the stage. You could feel the thick anticipation and tension of fans that had waited 13 years to hear new music live.  (If they hadn’t caught Tool at Open Air Chicago, this would be their first time hearing it.) Maynard James Keenan, Justin Chancellor, Danny Carey, and Adam Jones emerged one by one to deafening roars from the 23,500 fans in the crowd, and promptly proceeded to play the mind-centering ten minute title track “Fear Inoculum.”

That would be the last new song the crowd would hear until the intermission other than “Pneuma”… yes there was an intermission. During this curious time the curtain once again enclosed the stage and a countdown timer was projected onto it. When the curtain opened, drummer Danny Carey entered the stage solo and walked straight to the hanging gong in the back. He then took us on a “Chocolate Chip Trip’ which is a track I now appreciate so much more after seeing it live, for all of its compound intricacies you may not otherwise notice with the ear alone. In between “Fear Inoculum” and “Chocolate Chip Trip”, the band took us on a journey playing “Aenima” from their 1996 album, to songs from 10,000 Days, Lateralus, and even a special treat from their 1993 album Undertow. Before “Intolerance” began, singer Maynard James Keenan requested that everyone in the audience under 30 raise their hands. He then told them they were “not even sperm when that song was written.” Time traveling aside, I have never seen a crowd so drawn in to a show. The crazy guy next to me almost tumbled down the seats he was so into it- shouting every lyric and fist-pumping along. I was just as mesmerized as the rest of them, but who wouldn’t be with the musical skills of these four prog-rock/metal icons combined with a full laser light show and a full-size movie screen displaying intense visuals the entire show. These four men have been playing together since 1995, and it shows in their flawless and godly performance.

At the conclusion of the show, Maynard announced that (jokingly) since there has been no murders in the duration of the show, the crowd was allowed to take out their phones and record/take pictures of the final song, “Stinkfist.” Typically the band is very strict on the no-camera policy, so everyone was quick to take advantage of grabbing a memory clip. You can see mine below, as well as the full set list of this mind-blowing show.

No pictures, words, or video can even really come close to describing a live Tool show. I am already looking forward to the next album, to experience it all again…

Nicci Allen is a photography/graphic design major who has been an active and involved member of the music scene since she was old enough to be let in local shows. Whether it was bartending concerts at The Pearl Room, being an involved member of the Girls of Metal, booking and promoting local shows and benefits, attending festivals and supporting artists of every genre, or DJing and writing her own music, Nicci has always made music a necessity in her daily life.
Related Items10000 Daysadam jonesdanny careyFear InoculumFeaturedJaz Colemanjustin chancellorKilling JokeLateralusMaynard James KeenanNicci Allenon stage reviewprog rockProgressive MetalStinkfistToolUndertowUnited Center
← Previous Story A DAY TO REMEMBER, I PREVAIL, & BEARTOOTH @ CREDIT UNION 1 ARENA – CHICAGO, IL
Next Story → BENT KNEE @ BEAT KITCHEN – CHICAGO, IL