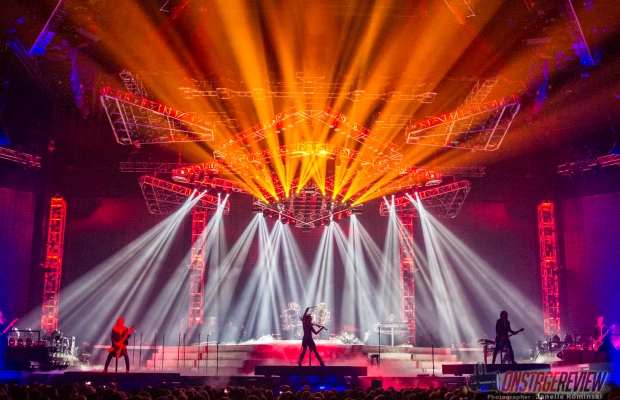 It’s the most wonderful time of the year! Each and every December I make sure to continue my annual tradition of seeing the Trans-Siberian Orchestra… twice.  They have two touring groups, the East Group and the West Group.

Last year I saw the East in Ft. Wayne, Indiana and the West in San Diego, California.  This year, I get to stay a little closer to home.  The West Group stopped by the iWireless Center in Moline, Illinois on December 8, which was the 15th TSO show I’ve attended, and coming up on December 23, I am seeing Trans-Siberian Orchestra’s East Group in Chicago with my family.

Both groups perform a plethora of shows in a very limited amount of time all over the United States and Canada.  This year, they are out supporting the debut of their album, ‘The Ghosts of Christmas Eve’ with a new show “Ghosts of Christmas Eve – The Best of TSO and More.”  With every ticket purchased online at www.Trans-Siberian.com, you get a digital download of TSO’s new album.

This year was different, in the best way possible.  The tour changes up their set design and graphics each year, but I have to say, I thought this year was spot on.  Usually the stage has two moving arms that extend over the audience, but I never fully like that mechanism.  This year they had a horseshoe shaped platform that lowered itself from the ceiling, along with five different level platforms that raised and lowered to create a visual extravagance.

Trans-Siberian Orchestra’s music ignites a fire in my soul. Their tunes are pure perfection.  When you can see their performances, in-the-flesh, complete with lighting, lasers, snow, pyro, smoke, moving stages, talented musicians, amazing singers – you’ll become hooked, just like I am.

I have usually favored the East Group over the West Group, but they are now both equal in my mind.  I feel I was partial to the East because I was more familiar with their performers.  I’m ecstatic for the return of TSO East guitarist, Joel Hoekstra, this year!

At the beginning of each show, two to three TSO cast members come out on stage and present a check with a local celebrity. TSO always gives back and for every ticket sold at every show, they donate $1 to a local charity. TSO donated $3,300 to Handicapped Development Center and $3,300 to Genesis Health Services Foundation, both local to the Moline area.

I would like to show my appreciation to the Trans-Siberian Orchestra crew. The amount of work it takes to put on a production like this is unlike any other and they deserve a round of applause and huge respect.

Janelle Rominski’s favorite place to be is in the photo pit. She has been to over 600 concerts and loves the feeling of being close to so many talented musicians and taking quality photos of their shows. She began her passion of “rocktography” and show reviews as soon as she could drive herself to concert venues.
Related ItemsAl PitrelliAndrew M. RossAngus ClarkApril BerryAsha MevlanaAshley Hollister and Rosa LaricchiutaChloe LoweryDino JelusicFeaturediwireless centerJane Manginijanelle rominskiJeff Scott SotoJodi KatzJohn BrinkJohn O. ReilleyJohnny Lee MiddletonMats LevanmolinePhillip Brandontrans-siberian orchestratwo new female vocalists to the West Group. Their powerful and soulful singing encompassed the entire venue. TSO West includes guitaristsVitalij Kuprij
← Previous Story SCOTT STAPP & ADELITAS WAY @ House of Blues – Chicago, IL
Next Story → OAK RIDGE BOYS @ Weidner Center – Green Bay, WI