It is my annual tradition, every December I see the Trans-Siberian Orchestra’s Christmas show twice.  Why the same show twice?  Well, they have two touring groups, the East and the West and I thoroughly enjoy seeing the two groups.

Both groups perform an insane amount of shows in a severely short amount of time all over the United States and Canada.  This year, they are out supporting the debut of their album, ‘Letters From The Labyrinth’ with a new show “Ghosts of Christmas Eve – The Best of TSO and More.”  What’s great, is that with every ticket purchased online on www.Trans-Siberian.com, you get a digital download of TSO’s new album ‘Letters From The Labyrinth.’ I’ve listened to it several times and it is fantastic. 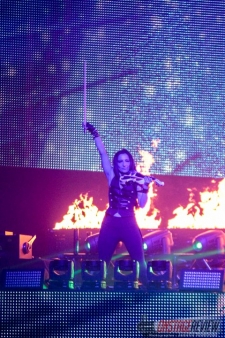 This year, I decided to up the ante.  The closest the East Group was going to be to Chicago was Ft. Wayne, Indiana at the Allen County War Memorial Coliseum on December 3, 2015.  So I got in my car and drove 3.5 hours and one time zone away to see TSO East.  When looking at their tour schedule, I saw that the West Group was going to be in San Diego, California the next day on December 4, 2015.  After TSO East concluded in Indiana, I drove 3.5 hours back home, packed and headed to O’Hare International Airport.  I hopped on a 7:00 am flight and 3.5 hours later, was in sunny California two time zones away to see TSO West perform at the Valley View Casino Center in San Diego.  I also got to visit with my sister who just moved to that town. 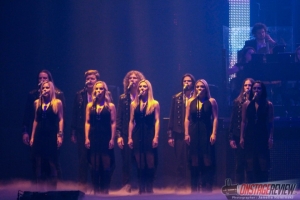 There is just something so spectacular about TSO music that makes me extremely happy.  Their tunes are epic, but when you can see their performances full of lighting, lasers, snow, pyro, smoke, moving stages, talented musicians, amazing singers – you’ll become hooked.

I have always preferred the East over the West, but this year, both groups were phenomenal, they are both equal in my mind and the two groups really brought the Christmas spirit alive.

I think I was more partial to the East because I was more familiar with their performers.  Electric violinist, Roddy Chong, was born in my current town (Schaumburg, Illinois), I also can’t forget about guitarist Chris Caffery from Savatage, I’ve always adored the bassist, Dave Z. and I’ve met and photographed vocalist Russell Allen in Argentina performing with his band Adrenaline Mob for On Stage Review. 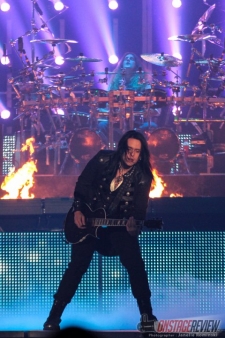 I’ve seen guitarist Joel Hoekstra perform with TSO for many years and have seen him with his current band Whitesnake, former band Night Ranger and saw him kill it in “Rock of Ages” the musical on Broadway. Unfortunately, since Hoekstra is Whitesnake’s permanent guitarist, he was absent from TSO this year as he’s touring with his band in Europe.  Taking over his “role” in TSO is former Emphatic guitarist, Bill Hudson, who definitely had some big shoes to fill, and he filled them well.  New this year to the vocal lineup was Zak Stevens who provided great talent and was a wonderful addition to TSO East.

At the beginning of each show, two to three TSO cast members come out on stage and presented a check with a local celebrity.  TSO always gives back and for every ticket sold at every show, they donate $1 to a local charity.  TSO donated $6,549 to Big Brothers and Big Sisters of Northeast Indiana at the Ft. Wayne show and $5,526 was donated to Coe’s List in San Deigo.

I also have to pay major respects to the entire crew of TSO.  The amount of work it takes to put on a production like this is unlike any other.

They have a slew of more shows from now until end of the year, check them out:

View my photos from both shows below:

Janelle Rominski’s favorite place to be is in the photo pit. She has been to over 600 concerts and loves the feeling of being close to so many talented musicians and taking quality photos of their shows. She began her passion of “rocktography” and show reviews as soon as she could drive herself to concert venues.
Related ItemsFeaturedft. waynejanelle rominskisan diegotrans siberiantrans-siberian orchestratso
← Previous Story THE MAIN SQUEEZE Review @ Concord Music Hall – Chicago, IL
Next Story → BRET MICHAELS @ H.O.M.E. Bar Chicago – Arlington Heights, IL