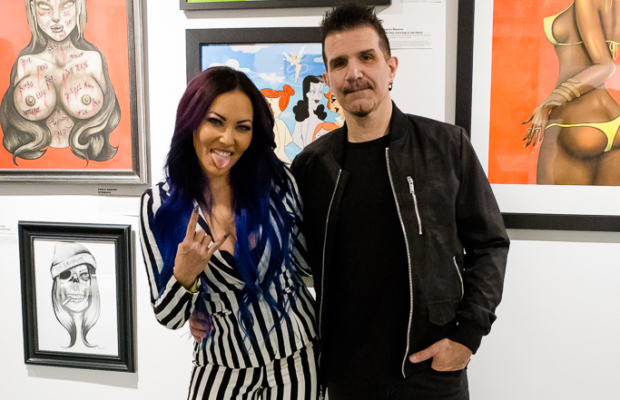 The world is beginning to show signs of normalcy again. We were lucky enough to be invited by Punk Rock & Paintbrushes to attend an art showing on March 20th. They are a globally recognized group passionate about art, change, progress, and the evolution of the art community and the punk rock movement. Groups like this are what keep these communities and movements alive.

On Stage Review has been quiet for over a year. We have missed the reviews, we missed the photos, but most of all we missed the SHOWS. Nicci and myself crawled out of our hole to see people and mingle with musicians and artists again for the first time since the Lamb of God show on Valentine’s Day of last year. This was a treat to not only see badass and inspiring artwork, but to get a little bit more of an intimate view into the lives of some stars in the metal scene.
Charlie Benante is the well known beast of a drummer for the legendary and game-changing band Anthrax. Carla Harvey is one of the 2 metal goddesses that front one of the best live metal performances in the game right now; Butcher Babies. While these 2 are primarily known for their musical production, they are both extremely vibrant visual artists as well. They are both versatile artists that have fine tuned their talents for many mediums and for many reasons. These artists are an inspiration for any young musician or artist that wants their work to be seen by the world. They are doing it right.
Wandering the halls of the showcase, it was so incredibly cool to see the variety and exotic approach that these two take to their work. The first impression I got from Charlie’s paintings was that it was very purposefully abrasive (not unlike his musical styles) but very intentional as well. Some of his pieces were loud as hell and would kick you in the face, while others were more intricate and intentional like his tributes to the Beatles, KISS, and the legendary Eddie Van Halen. The amount of detail and precision in some of his digital works was dumbfounding. Carla’s work was just as vibrant and loud, but had more of a delicacy to it. She makes her sexuality loud and clear in her art (as she always has) while showing a more vulnerable side that generally isn’t as well known or mainstream for her. It is awesome to have the opportunity to see further into the personality of artists, whether they be musicians who are known for a specific genre or artists who are expected to produce a certain style or “vibe.” When you get to see the layers get peeled back on artists, you learn that we are all simply human. Even the biggest rockstars in the world have their own demons, their own struggles, and their own message that is important to them. These paintings, to me, showed me a specific and new side of humanity in these two beautiful people. They showed me some intense emotion, some sincere concern, some compassion, and ultimately some humility within both of these artists. Of course there is still that comedic undertone and that wild side from both of these two that is showcased all the same, but it was nice to get a new perspective on two very unique artists.
Charlie and Carla are both featured along with 27 other musicians and artists in the newly released coffee table art book “The Insides of Artist’s Written By Outsiders” that Punk Rock & Paintbrushes has put together. It can be best summed up by these excellent excerpts from the introduction of the book:
“And that is what this book is here to represent, 29 creative souls whose work reminds me that Punk Rock is not just about music, and paintbrushes are not just tethered to the idea of art, but instead the two together are the perfect marriage of life in a radical way.”
“This book is a reminder to follow your dreams whatever they may be, take a second or third (or tenth) chance before ever giving up, and that just because you went down one road does not mean there is not plenty of time to change the game plan. “Yes, there are two paths you can go by, but in the long run, there’s still time to change the road you’re on.” – Led Zeppelin
I found my silver lining in my battle with cancer to be art, music and a simple painting and now 13 years later I have found the silver lining in the year of 2020 to be THIS BOOK. Always remember there is a silver lining… you just need to look for it. Life is whatever you want it to be and these artists are proof. Enjoy this time capsule of Punk Rock & Paintbrushes.”
You can check the book out here: https://www.punkrockart.com/product/prp-new-book-the-insides-of-artists-written-by-outsiders/

Dan Scheiman With an entirely open and unbiased obsession with music, Dan decided to take the opportunity given to him to share his thoughts for On Stage Review. Having been to hundreds of concerts of a variety of styles and genres over the years, he's no stranger to live music. He has been playing bass guitar for over twelve years now and has been dabbling in vocal work, drums, and piano for almost as long. Growing up listening to metal and industrial then transitioning into jazz and classical, and now having a particular love for funk or anything that grooves; his perspective comes from a well-rounded musical background and some amateur experience as a musician. He has too many favorite bands to list, but some of his favorite live experiences include: Sigur Ros, Porcupine Tree, Papadosio, Tool, The Ocean, Animals As Leaders, Lettuce, and of course, Victor Wooten.
Related ItemsartCarla HarveyCHICAGODan ScheimanFeaturedgalleryMetalMusicNicci Allenon stage reviewpunkpunk rock and paintbrushesZhou B Art Center
← Previous Story LAMB OF GOD @ HOUSE OF VANS- CHICAGO, IL
Next Story → Motherfolk @ Empire Control Room & Garage – Austin, TX