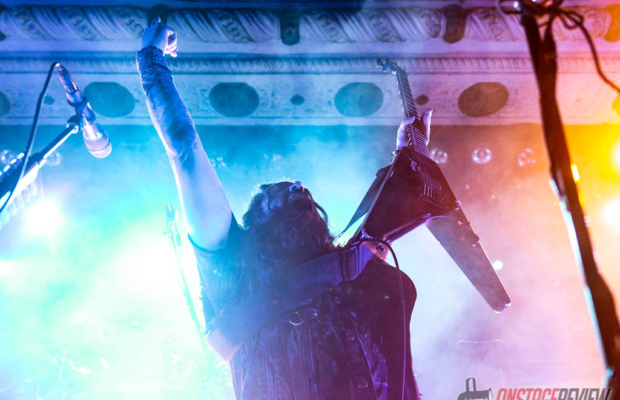 Machine Head made a stop at The Metro on their Burn My Eyes 25th Anniversary Tour on February 15, 2020 and played a fantastic three hour set. Despite singer Robb Flynn and guitarist Logan Mader having the flu and strep throat, as well as Robb at the beginning stages of pneumonia, the band played on and the did not disappoint. How many bands can put on an entire three hour set, let alone having these sicknesses? I give major props to the band and they still sounded like they were on the top of their game. I’ve only had a chance to see Machine Head twice but their Hellalive album is easily my favorite live album because they sound flawless live. It also looked like they were recording and video taping this show so be on the look out for a video being released.

The night started out with the lights going out and the audience started their chant of, “MACHINE FUCKING HEAD,” which echoed throughout the venue at any chance that the fans had throughout the whole night. The beginning of “Imperium” started to play with the band entering the stage and the lights kicked on as the band began to play. Immediately, the energy in the venue was felt from the chants from the fans and the overall power that Machine Head brought in. Robb knows how to direct a crowd and has a fantastic voice that easily stands out among all of the other metal bands.

The first half of the night was a mixture of all of the albums, with songs like, “Now We Die,” Locust,” Catharsis,” and “Aesthetics of Hate.” These are very dedicated fans that helped sing parts of the songs and at times, had the entire floor area as a circle pit, as directed by Robb. Something memorable was the fans singing the ending part of, “Darkness Within” and it brought chills from everyone singing in unison. Or even when playing, “Ten Ton Hammer,” the fans screaming the chorus. Throughout all of the solos, you can watch the crowd put their fingers up to play and headbang along. The fans got a kick out of Robb asking Chicago to make some “Illi-noise!” as well.

The second half off of the show was playing Burn My Eyes all the way through from beginning to end but also threw in a few covers at the end of the night. Some of the mashups included some songs from Metallica, Slayer, and others. Of course the fans went nuts when “Raining Blood” and “South of Heaven” came on because, well, Slayer! The night ended with, “Block,” as it’s the last song on the album, and Robb instructed the fans to put up their middle fingers and bang their heads. As the song ends, the band thanks everyone for coming out as Robb holds his guitar high above his head.

If this show wasn’t sold out, it had to at least be close because The Metro was packed on the floor and all around the balcony with very little room to move. The Metro has always been one of my favorite venues because the sound is usually one of the best in the area and tonight was no different. You could hear every instrument and it was balanced like it should be heard. The stage was covered in the Machine Head logo, as you’ll see in some of the pictures, with the drums up on a riser and lights set up all around.

If you didn’t go to the show, you missed a great night and you should try to see them the next time that they come around. They know how to give a great performance and sound perfect while doing so.

There are a couple dates left on the tour so if they’re coming to a city near you, make sure to get tickets, if they’re still available: