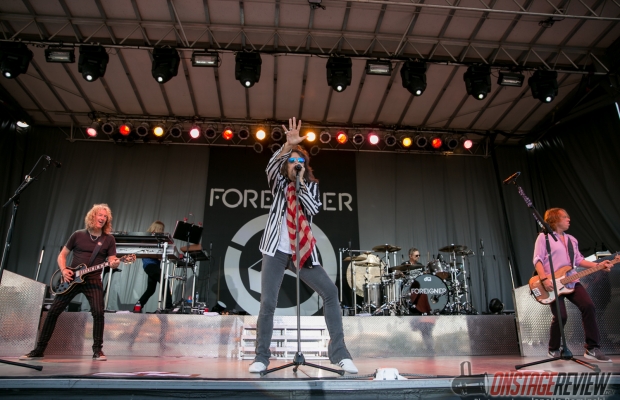 Photos and Review by Janelle Rominski

Multi-platinum recording artists, Foreigner, performed an electrifying set at Park LGK in Elk Grove Village, a suburb located northwest of Chicago last night.  Their show celebrated the Village’s 60th Anniversary as a part of their Mid-Summer Classics Concert Series with a free, first-rate show, followed by a spectacular fireworks display.

I saw Foreigner for my first time last month in Europe at the Sweden Rock Festival where they performed in the rain.  I was filled with anticipation waiting to see them for a second time, without the precipitation.

Foreigner opened with their single “Double Vision” and took their thousands of audience members through a journey of their hits with “Cold As Ice” on this very hot and humid night.  Other singles that got the crowd off their seats, raising their hands and tapping their feet were “Jukebox Hero,” “Head Games” and “Feels Like The First Time,” just to name a few.

In the middle of the show, vocalist Kelly Hansen jumped off stage and gave hand shakes and high fives to the crowd.

During the encore, the Elk Grove High School Choir accompanied Hansen with “I Want to Know What Love Is” where he took my camera on stage with him and you can see his selfie with the choir in the photo gallery below… and finally, “Hot Blooded” concluded this rockin’ night.

Foreigner is currently in the middle of a huge tour in the United States and will be heading to Europe in August.  To check them out in a city near you, visit their website HERE.

Janelle Rominski’s favorite place to be is in the photo pit. She has been to over 600 concerts and loves the feeling of being close to so many talented musicians and taking quality photos of their shows. She began her passion of “rocktography” and show reviews as soon as she could drive herself to concert venues.
Related Itemselk grove villageFeaturedforeignerjanelle rominskikelly hansenmid-summer classics concert series
← Previous Story TASTE OF CHAOS @ COMERICA THEATER – PHOENIX, AZ
Next Story → WEEZER @ ASCEND AMPHITHEATER – NASHVILLE, TN