The US Cellular Coliseum was brought to life Thursday night when Dave Mustaine’s Gigantour rolled into town. Many eager fans got off work early to see the bands on the line-up which included Death Division, Newsted, Hellyeah, Device, Black Label Society, and Megadeth. Death Division kicked off the show with an insane amount of energy and prepared crowd for the rest of the night by playing songs off their recently released EP. After a quick set change, Jason Newsted’s band hit the stage playing energetic songs with a slight old-school metal vibe, assuring us and the crowd that his band was one to be on the lookout for.

Hellyeah took the stage next, and even though the arena was barely half-full, Hellyeah played like they would to a sold out crowd. The audience took their energy and blew the stadium up with it, even the people sitting on the sidelines got on their feet for the epic performance. Whether singer Chad Gray was screaming out lyrics to “War in Me” or standing back and letting the crowd belt out the melodic lyrics to “You Wouldn’t Know,” he emitted energy unlike any other, running around the stage, jumping off Vinnie Paul’s drum riser, never letting himself or the crowd take a break.

Although Hellyeah would make for a tough act to follow, David Draiman’s three man band, Device, gave the crowd a satisfying show. They weren’t as heavy as the previous three bands, but any time Draiman is onstage the audience feeds off his ominous presence. Device played songs off their recently released self-titled album and included their popular single, “Villify,” which had the crowd nodding in approval. They ended with a superb cover of the Nine Inch Nails song “Wish,” and exited the stage to make room for Black Label Society. Black Label built the crowd’s excitement by draping an enormous curtain with their name and skull logo on it while the stagehands set up. Finally, the lights dimmed, sirens started blaring, and spotlights circled around the room. Tammy was in the photo pit preparing to get some shots of show, so I stood in the crowd alone (and slightly frightened) with the sudden burst of noise and flashing lights. This crazy prelude had the crowd on their toes in anticipation, making them go crazy when Zakk Wylde hit his first chord in “Godspeed Hellbound.” The rest of their set included fan favorites like “Overlord,” and “Concrete Jungle.” Midway through their set, Zakk played an awe-inspiring, draw-dropping guitar solo, and after the wave of applause the band went right into another favorite, “Parade of the Dead,” keeping the crowd engaged throughout the entire act. They finished up with “Stillborn,” and immediately after, Zakk put his guitar down and beat his chest like Tarzan, a perfect way to end the raw, animalistic show they had just put on.

We patiently waited, watching in awe at the massive amount of work being done to set up the stage for Megadeth. Our anticipation grew larger as more and more speakers and video screens were unveiled. As the smoke rose from the bottom of the stage the arena came to life. The television screens went fuzzy, the lights went dark, and “Prince of Darkness” came on over the speakers. After a few minutes of the introduction, Shawn Drover appeared behind the drums and started pounding out the beat to “Trust.” The guitars started and the rest of the band materialized on the stage, as if they were ghosts making an appearance just for the night, and the audience went wild. Playing a mixture of old favorites like “A Tout Le Monde,” “Architecture of Aggression,” and “She-Wolf” along with some newer songs like “Super Collider” and “Kingmaker,” Megadeth put on an impressive show, and supplied the audience with a gnarly start to their weekend. Sure, Dave Mustaine is getting older, but his voice was just as sharp and haunting as it was nearly a decade ago in 2005 when Gigantour first hit the road. Towards the end of their set they brought out some members from each of the other bands, putting on an “allstar” performance covering “Cold Sweat” by Thin Lizzy. The energy given off made us feel like we were watching a group of long-time friends reunite and jam to a classic like they probably used to in their parents garages. Nobody acted like they were above anyone else; they all played and sang as one, seeming to have a great time rocking out with their tour mates.

Megadeth finished up their set with “Peace Sells,” gave a big thank you to the crowd, and walked off the stage. Not a soul budged; everyone waited, hoping there would be an encore. Within minutes Megadeth was back on the stage playing “Holy Wars…The Punishment Due,” fulfilling the audience’s wishes. Overall, the production was breath-taking, with the television screens playing angst-ridden clips and eerie visual effects throughout the set and sometimes showing small videos in between songs. At one point the crowd got a good laugh watching the infamous scene from Wayne’s World where Garth is getting seduced and interrupts to ask “got any Megadeth?” The show provided so much variety and energy that I left feeling like I had just attended a two-day metal festival. It was surprising to me with such a great lineup that the arena wasn’t overflowing with fans, but those who did attend got their money’s worth. With the perfect mix of newer bands like Newsted and Device, along with some old favorites like Hellyeah and Black Label Society, Dave Mustaine definitely delivered an incredible package with this round of Gigantour. 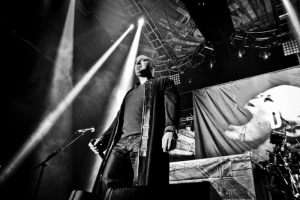 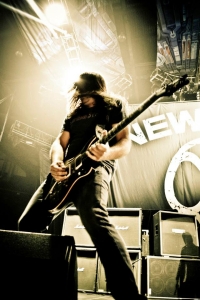 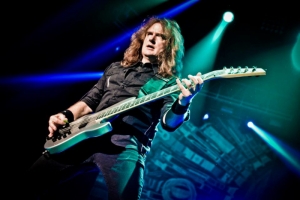 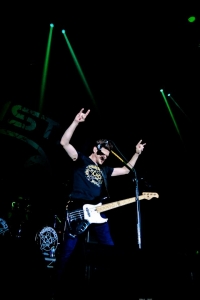 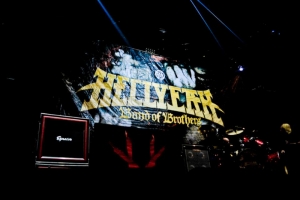 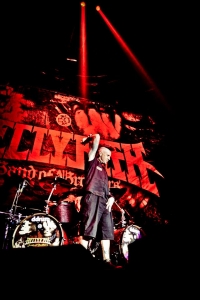 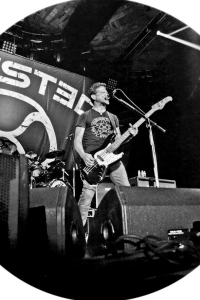 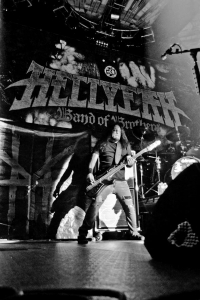 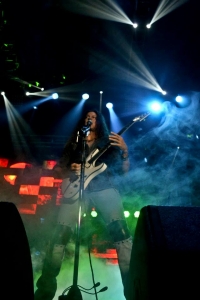 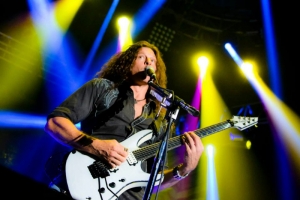 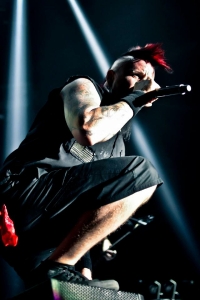 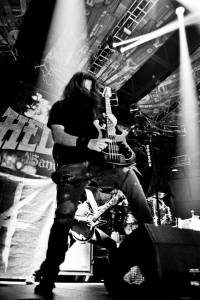 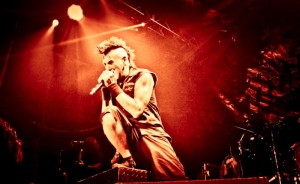 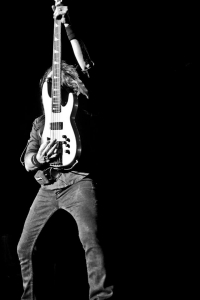 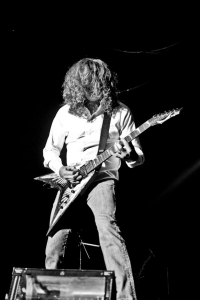 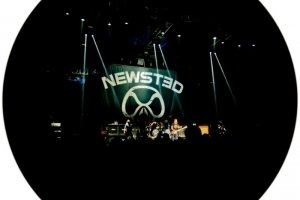 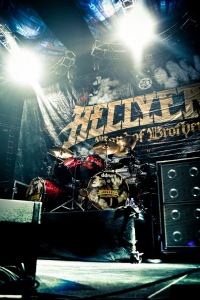 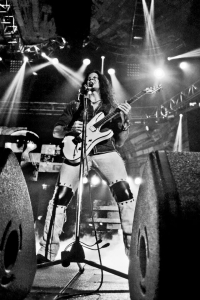 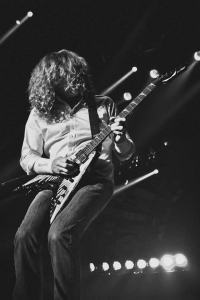 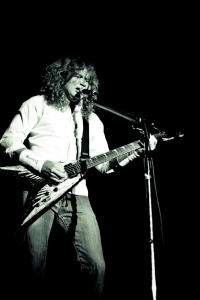 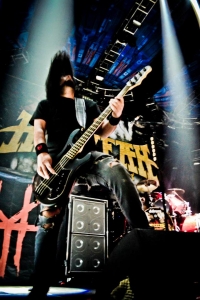 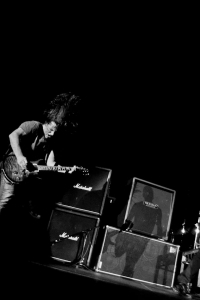 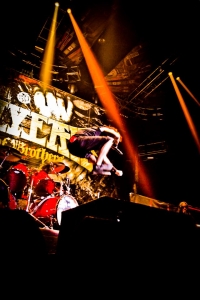 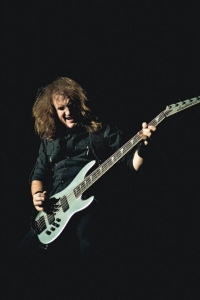 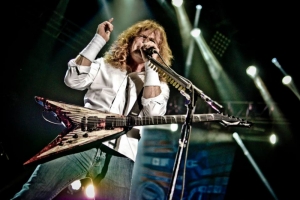 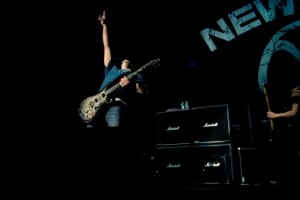 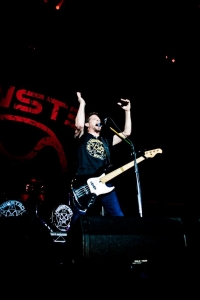 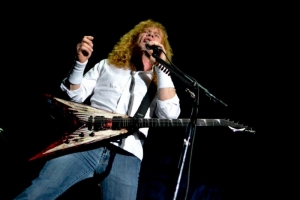 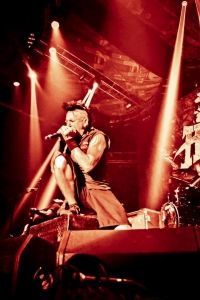 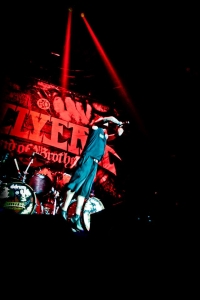 Kat Corbo is currently a student at UW-Madison studying Communication Arts and Business. She recently stopped writing for her school's newspaper and moved to the On Stage Review in order to keep her artistic freedom and to be able to freely write and review anything that she felt passionate about. 99% of the time you can catch Kat wherever Red is (don’t be fooled, they WILL drive 6+ hours for a good live show!). They’re a one of a kind duo that hopes to inspire young people their age to see that rock n’ roll is alive and well!
Related Items
Next Story → THREE DAYS GRACE @ Austins – Libertyville, IL