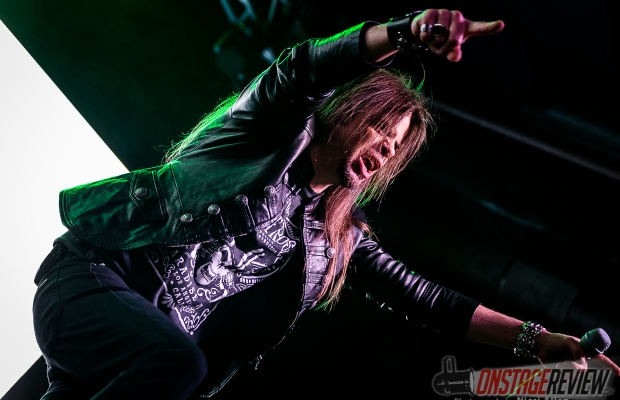 Coming into the show I wasn’t very familiar with the band Meytal other than the fact that Meytal Cohen herself was the the backbone of the project. I had seen various drumming videos of her covering Tool, System of a Down, and Slipknot tracks, so needless to say, I knew she was more than capable of carrying a metal band of her own. With razor sharp chops, impressive speed, and excellent technique, this girl is idolized by many drummers in the metal community. Meytal and bassist Anel Pedrero held an air tight pocket together while Travis Montgomery and Doc Coyle put together some killer syncopated guitar riffs to compliment them wonderfully. They had a wall of sound effect to their music but the groove was always thick and tasteful underneath the noise barrier. Bringing everything together with utmost emotion and a gripping vocal tone was Eric Emery. With the energy, the smiles, the professionalism, and the raw talent they brought to the stage, I am excited to see what this fairly new project will be bringing to the table in the upcoming years.
Quite literally coming out with a bang, Scott Rockenfield appeared behind his drum set as explosions went off on both the screens on either side of the stage and the lights in the venue dimmed. Queensryche, the legendary name that has terrorized venues worldwide since 1982 suddenly appeared across the stage. Wearing a flashing spotlight headband to illuminate himself and his kit, Scott proceeded to hammer away on his set so fast you could barely see his arms, only stopping to stand and rile up the already screaming and unruly crowd.
The rest of the band entered the stage and earned a much deserved applause, followed by a sea of metal horns being raised. “Sweet Dreams, You Bastard” was one of the first tracks they played, and I soon realized I wasn’t quite prepared for what I had gotten myself into. Not only does Queensryche have some of the heaviest riffs out there, but the images and visualizers coupled with their performance are some of the darkest, most twisted, and most unsettling I have seen since Porcupine Tree or maybe Tool.
Even though he has only been with the band since 2012, Todd La Torre was putting on a very respectable performance. Todd was crystal clear and hitting insanely difficult notes reminiscent of Matt Barlow, Hansi Kursch, and of course Geoff Tate. With one of the two guitarists, the bassist, and the drummer still carrying the original torch from the early years, this was an incredible showing of heart, drive, and undying talent from everyone involved.
Slowing things down just a bit, they played “Bulletproof” from the album Condition Human. The howling guitar solo made the venue feel like it was a thousand times bigger than it was. Allowing the crowd a quick breather, Todd gave a sincere thank you to the fans of Chicago for kicking off their tour the right way, and for all the support throughout the years.
Digging through some of their older albums towards the end of the show, one of my favorite picks was the track “Empire”. It sounded like the entire crowd was singing along with this particular track. Not only was this track unbelievably heavy, but it showed off a very unique writing style that seems to have helped separate Queensryche from the rest of the bands of their time. It is always amazing to see bands that are still rocking as hard as these guys are more than 30 years after they got started. I am so glad I got a chance to experience such a legendary performance. Although it seems like they could go on touring forever, be sure to see Queensryche next time they come around before they decide its time to end their reign over the metal world.

Dan Scheiman With an entirely open and unbiased obsession with music, Dan decided to take the opportunity given to him to share his thoughts for On Stage Review. Having been to hundreds of concerts of a variety of styles and genres over the years, he's no stranger to live music. He has been playing bass guitar for over twelve years now and has been dabbling in vocal work, drums, and piano for almost as long. Growing up listening to metal and industrial then transitioning into jazz and classical, and now having a particular love for funk or anything that grooves; his perspective comes from a well-rounded musical background and some amateur experience as a musician. He has too many favorite bands to list, but some of his favorite live experiences include: Sigur Ros, Porcupine Tree, Papadosio, Tool, The Ocean, Animals As Leaders, Lettuce, and of course, Victor Wooten.
Related ItemsConcord Music HallDan ScheimanFeaturedMeytalMeytal CohenNicci AllenQueensryche
← Previous Story TURKUAZ Review @ Chop Shop – Chicago, IL
Next Story → 70000 TONS OF METAL@ MIAMI/FT. LAUDERDALE/JAMAICA