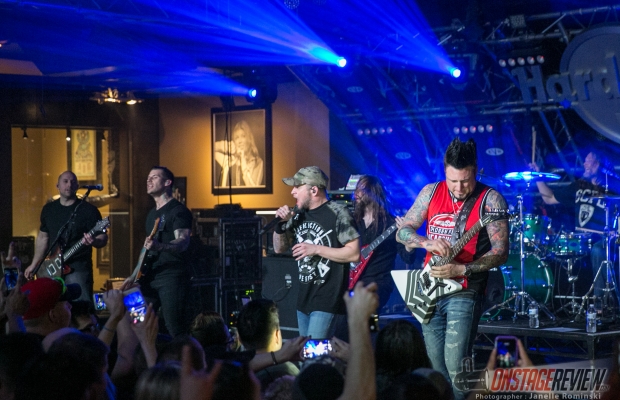 The 5th Annual RadioContraband Rock Radio Convention & Awards started out with a bang in Las Vegas on Thursday night with a free showcase featuring All That Remains, DED, Radkey and Righteous Vendetta.

The showcase doubled as a Las Rageous kickoff party.  The first-ever Las Rageous music festival will take place over the course of two days in Las Vegas on April 21 and 22, 2017.  It’ll feature a slew of bands including Godsmack, Avenged Sevenfold, Coheed and Cambria and Breaking Benjamin, just to name a few.

RadioContraband’s CEO and Editor, Steve Walker tells All Access that “RadioContraband started as a website. An environment that included tools to expose the music impacting rock radio, charts, news and tour dates, artist and industry profiles.”

The RadioContraband Conventions are attended by rock radio station personnel from all over the country, label reps, bands, solo artists and anyone who can benefit from the services RadioContraband provides. The three-day convention begins with a welcoming party/networking event on the first day, followed by panels, discussions, music listening parties, band interviews/meet & greets, and recording artist showcases on the second and third days. Finalizing the festivities are the RadioContraband Rock Radio Awards.  This year it was hosted at Vinyl Las Vegas where radio stations, record labels, artists and the VIPs of the rock radio industry were recognized for their hard work.

The second day of the RadioContraband Convention ended with a killer showcase.  All convention attendees attended this show and it was open to the public free of charge.  These showcases are incredibly important for the artists performing because they get to play their music in front of radio station program and music directors from around the USA.

First up on the bill was Righteous Vendetta, hailing from Wyoming. They kicked off the night with power and the force to their show.  The audience got into their tunes right away and there was even a mosh pit.

Up next was Radkey, a trio of guys who “grew up in a shitty little pink house in St. Joseph, Missouri.”  Their amazing music filled the room for only having three instruments playing on stage accompanied by rockin’ vocals.  These three musicians certainly have a rad future ahead of them with their talents.

After Radkey, were Phoenix friends, DED, whose performance I was eagerly anticipating. Their single “Anti-Everything” is currently spinning on rock radio nationwide and I’ve heard that song played on SiriusXM’s Octane several times. Their performance was full of energy and I didn’t want to take my eyes off of them. Their eyes were covered in white-out contacts, making them a spectacle to see… making me wonder if they could actually see.  Things that make you go hmmm?

Concluding the night was one of my favorite groups, All That Remains. This east coast-based band has always had a special place in my musical heart.  They take their craft seriously, but also have so much fun at their shows.  I’ve seen them more than half a dozen times, but this was my first night seeing them with their new bassist, Aaron Patrick, who brought a new vibe to the band.  Making a special appearance that night was Jason Hook, guitarist for Five Finger Death Punch. Hook played several songs with ATR and they brought a brand new, amplified energy to the venue and the crowd went wild.

Check out my photos from the showcase below!

Janelle Rominski’s favorite place to be is in the photo pit. She has been to over 600 concerts and loves the feeling of being close to so many talented musicians and taking quality photos of their shows. She began her passion of “rocktography” and show reviews as soon as she could drive herself to concert venues.
Related ItemsAll That RemainsdedFeaturedhard rock cafejanelle rominskilas vegasradiocontrabandradkeyrighteous vendetta
← Previous Story OVERKILL @ Concord Music Hall – Chicago, IL
Next Story → RADIOCONTRABAND SHOWCASE @ Vinyl – Las Vegas, NV