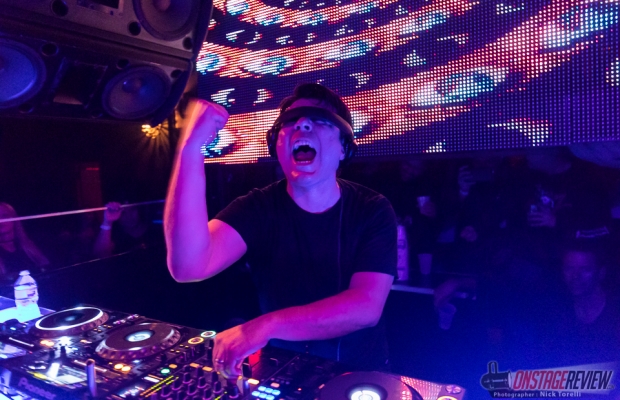 Photos and Review by Nick Torelli

The Crystal Method put on yet another awesome performance as they have been doing since 1993 when they pioneered the electronic music scene. Crystal Method played for the umpteenth time on December 10th, 2016 at Beta nightclub in Denver Colorado. Scott Kirkland muted the music at one point to say, “Every time I play here, I feel like a kid again!” Scott’s energy, excitement, and passion for his music is very apparent. Scott had a health-scare in 2013 and doctors diagnosed him with a benign posterior fossa arachnoid cyst in the brain. After surgery and an infection, Scott is back and stronger than ever, and it was very apparent in his concert. Scott would occasionally wear his headphones so the head strap covered his eyes giving him a galactic spaceman or terminator look that fit the mood of lights, smoke, and confetti in the club.

Crystal Method has come a long way from their home studio named, “The Bomb Shelter” in the early 90’s. They have now toured all over the world, several times, been featured in several video games, and just released their 20th anniversary signature box set. Scott’s positivity and all-around happiness in what he does is very apparent from watching him perform. Scott and the crowd had the most energy when he played perhaps his most known song “Keep Hope Alive” from his first album titled Vegas.

Nick Torelli is a Denver based photographer and has been a professional photographer for 8 years now. Nick is an avid concert goer and lover of all types of music with bias towards the funky and creative artists. Nick is a creative photographer that goes above and beyond to get ‘the shot’. Nick captures the passion of people when performing by trying different things and pursuing all angles. Nick has been known to drive all night to make a concert 12 hours away. In addition, he also is a wedding, real estate, and food photographer and in his spare time he spends his days in the mountains of colorful Colorado rock climbing, mountain biking, and hiking. Concert photography is in Nick’s blood, his dad was a professional concert photographer and has shot for the Allman Brothers Band, George Harrison, The Grateful Dead, Leon Russel and many more.
Related Itemsbeta nightclubcoloradoconcertdenverelectronicaFeaturedLiveMusicnick torelliPhotosthe crystal method
← Previous Story DROWNING POOL, GEMINI SYNDROME & 9ELECTRIC @ BaseCamp – Lisle, IL
Next Story → SCOTT STAPP & ADELITAS WAY @ House of Blues – Chicago, IL