THE HIP ABDUCTION @ THE HOUSE OF BLUES – CHICAGO, IL 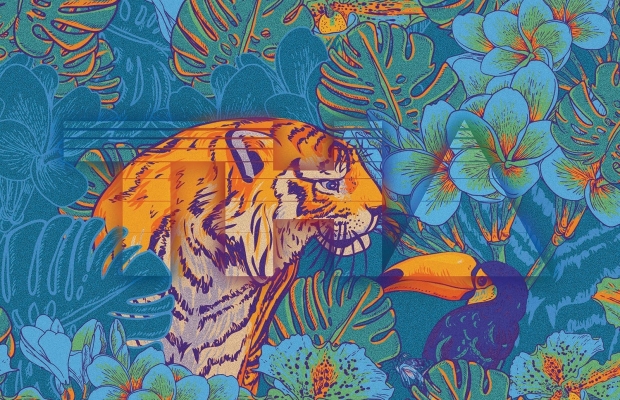 The Hip Abduction @ The House of Blues- Chicago, IL

The smell of gumbo was in the air this past Saturday, March 25th at the legendary House of Blues Chicago. The mighty Galactic was in town, and we were ready for some of the finest New Orleans has to offer.

I’ve seen Galactic burn stages to the ground on several occasions, and Saturday night was no different, but what really caught my attention was The Hip Abduction: a band I was not familiar with but have since developed an unhealthy obsession.

Being unfamiliar with The Hip Abduction, I was honestly expecting a breed of New Orleans funk, as Galactic is known to tour with their own kind. When I spotted a Ngoni (African Harp) in the corner of the stage, I knew I was in for something altogether different.

Immediately off the bat my ears were gifted something special. Synthpop vocals amidst a lush tropical sound permeated the air of the House of Blues, driven by an infectious tribal dance beat. Immediately the crowd started vibing, as if we were rain dancing in the Amazon at sunset.

They were on point throughout the entire set, tastefully blending reggae, funk, and dance music with an exotic tropical flare.

Despite being noticeably ill, probably from the shitty rainy Chicago weather, David New was squeaky clean on vocals. He had an indie pop sound that would absolutely slay on the radio. I can only hope they catch the break they deserve and we hear them on Q101 in the near future.

To top off a killer set, they absolutely nailed a cover of Wild Cub’s smash hit “Thunder Clatter”, before leaving the stage nice and warm for Galactic.

Their latest record Gold Under The Glow (Photo credit from new album) is a gem of feel-good tropical vibes from start to finish. The album and an assortment of dope merch can be found at http://stores.portmerch.com/thehipabduction/.

I look forward to their next stop through Chi city, hopefully as a headliner.

A music lover since the age of ten, Marc prides himself on an appreciation for diversity. From jazz to metal, country to hip hop, EDM to funk; he lives and breathes live music. Attending a handful of music festivals a year throughout the Midwest as well as concerts nearly every weekend, Marc passionately believes in music's power to unite and inspire. He has been a musician for over a decade. Favorite artists range from Muddy Waters and Miles Davis to The Beatles and Led Zeppelin, to Nas and A Tribe Called Quest. Current favorites include St. Paul and the Broken Bones, Snarky Puppy, Zac Brown Band, G-Eazy, Logic, and Lotus.
Related ItemsCHICAGOdanceFeaturedfunkgalacticHouse of BluesLive ReviewMarc HlavacNew Orleanson stage reviewOnstagereviewreggaethe hip abduction
← Previous Story FORQ @ MARTYRS – Chicago, IL
Next Story → SAVE FERRIS @ THE HOUSE OF BLUES – Anaheim, CA