By John Feinberg on February 22, 2019@JOHNJFEINBERG 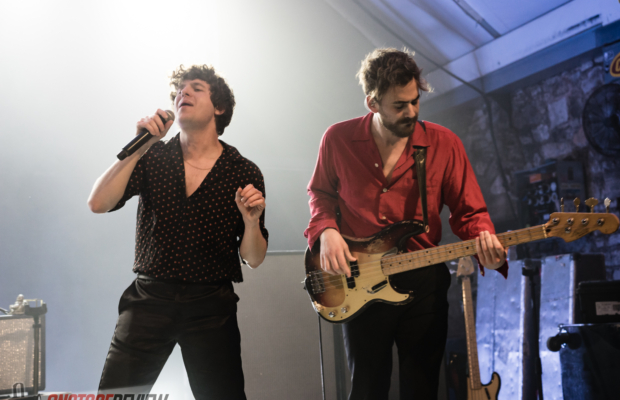 A warm winter-ish night in Austin was an even warmer welcome to Barnaby George Courtney (known to fans as Barns) as he returned to a city he knows very well. Courtney performed on a nearing four year-anniversary of his initial appearance in Austin during SXSW.

Courtney was the middle act for the main headliner, The Kooks, but he stole the show and it seemed as though a large part of the audience was there to see him and not The Kooks. With hits like “Fire” and “Glitter and Gold,” the crowd erupted with the same enthusiasm as Courtney as he stomped, sang and eventually crowd-surfed a few times.

Courtney is known for one style that he can do VERY well; rock with an attitude. Between the stomping, the clear-cut vocals with character and famous British rocker looks, Courtney delivers on every performance and every song. However, this can also mean that some songs — especially in the same album — can start to feel a little repetitive. With very little use of instruments or sounds outside of the basics found in rock band, you won’t be hearing any Muse-level synth sizzles in his background tracks. However, you do find some interesting practical sound effects like the wild west/cowboy-esque whistling from “Fire” that really add emphasis on the bridge of the song.

As for the Kooks — Luke Pritchard, Hugh Harris and Alexis Nunez — the band was electric as well, with Pritchard’s vocals and his constant movement coming in nearly on-par compared to that of Courtney. However, the energy was just…different. With Courtney setting the bar so high, it may have overall hurt the performance by The Kooks.

However, it is safe to say the band was still fantastic with hits like “She Moves in Her Own Way” and “Naive.” The Kooks are generally a more mellow rock group, similar to The Wombats rather than the more edgy Courtney. But, it all depends on what you’re looking for. If you want that softer, poppy smooth rock from Britain, go with The Kooks. Yet, prepared for a more Americanized and grungy Courtney ready to belt “Fire” in your face. And you’ll love it.

Overall, if you can catch the tour, do it. Come for The Kooks, stay for Courtney. You’ll be glad you did.